The Upfront Clip and Save Political Stump Speech

by Cory Vaillancourt
View ProfileFacebookTwitterGoogle+RSS Feed
March 21, 2012 at 9:39 AM 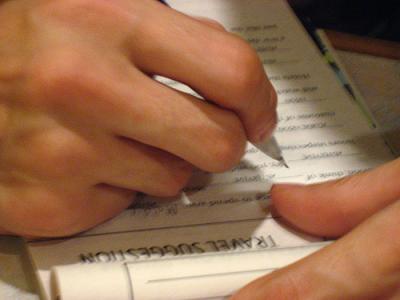 Remember Mad Libs? Yeah, me too. I loved Mad Libs. They were cool. Here's one I just did:

"Rod, aka Johnny Cool, hated to make decisions even when his beefcake depended on it. He headed in the direction of an all-night glitter dispensary nestled between a self-service unicorn station and an assisted suicide parlor. He pushed open the orifice, but didn't enter. The only street lamp on the dark ball gag illuminated the fear on his dark black soul. He was coming to another decisive moment, and as always, it scared the santorum out of him. He took a deep noun and entered the gimp mask. It was almost disgusting. He was adjective tired. Johnny slumped into a frothy leather booth. Every hole in his body ached. His bottom trembled. He needed coffee painfully."

Anyway, it's obviously still political season, and I'm supposed to be talking about political, umm, stuff, so I guess I'd better. Last month, we talked about polling the electorate. This week, let's talk stumping. Every candidate needs a stump, no matter how well they are currently polling. This speech needs to be short, sweet, and to the point, giving voters everything they need in less than 2 minutes. It should be rehearsed constantly, until it can be delivered perfectly at a moment's notice under any form of duress, like a late-night call from a reporter after a hard day of campaigning or an early-morning televised debate after a long night of polling.

I should know – back before McCain-Feingold, in the salad and gravy days of political consulting, I wrote dozens of these stump speeches for candidates, and after attending countless rubber chicken dinners grand and small, for both parties, I heard dozens more. Don't for a moment think it was all Shrinky Dinks and scotch drinks though – I've also seen things that would make a grown man weep as a small child, like Dennis Hastert devouring a still-living suckling pig, Olympia Snowe nude, and Mark Udall…Oh dear God, Mark Udall…never mind. Regardless, some of those speeches were pretty good. I can still remember a few of them, even now, word for word. And I learned from them.

Writing a stump speech is easy; this stuff is boilerplate and evergreen. Start with who you are and what you're running for. Toss in your bread-and-butter issues – no more than three – plus a dash of the current administration's failures. Add one lame joke or pun, then firmly knead that into a call to action. Garnish liberally with patriotism and promises. Throw in a smattering of guilt, and season with salt, vinegar, or a little indignation to taste. Mix it all up, half-bake it, adorn it with a plum before serving, and voila!

"Voila" means "shut up and take it" for those of you who do not speak French, so it's handy for a number of occasions, including this one. Since these stump speeches are all pretty much the same, and I have a lot of experience with them, I thought I'd save all you political candidates out there at least $2 each by supplying you with my magic stump speech recipe, for free. If you love politics as I do, and you love Mad Libs as I do, and you're a politician, you will love the do-it-yourself exercise below! Feel free to cut this out, fill in the blanks, and use it at your next campaign event or parole hearing. If you don't love politics like I do, and/or you don't love mad libs like I do, well…Voila!

Hi, I'm [your name here] and I'm [a democrat] [a republican] [a crazy person] who is [running for something] [running from something] [drunk]. First of all, I'd like to thank all you [rich people] [hired shills] [reporters] for coming out to [this luxurious mansion] [this North Cackalack VFW] [my parole hearing] today and giving me the opportunity to [fleece you] [venture forth from my lair] [patronize you]. Thank you. Give yourselves [a round of applause] [a round of live artillery] [a lobotomy].

This morning I had [an epiphany] [the shakes from delirium tremens] [a vivid conversation with a mythical being] and while I was in my [limo] [pickup truck] [spacecraft] on my way over from [the bar] [the barn] [Neptune], I thought I should share this with you:

As loyal [Americans] [patriots] [space alien robots], I know you all love [America] ['merca] [galactic conquest] like I do. We all pledge this loyalty to [our country] [our country's currency] [our space alien robot overlords], because it is the best country in [the country] [the world] [the galaxy].

That's why I decided to get involved – because people like us are getting a [good deal] [raw deal] [New Deal]! That's right! Working [families] [factories] [yachts] are very important to people like you and me, and they need more [gay marriage] [tears from baby bunnies] [monocles] to compete in this global economy.  The current administration has failed us, because they [don't hand out soup] [don't like freedom] [don't look like us], and I'm tired of it!

But I can't do this alone. I need your help. I need you to [start fracking in your backyard] [get your checkbook] [rob a gas station] and do what you know is right. And in return, I promise to [go to Washington] [start throwing elblows] [quickly become a lobbyist] so I can really fight for people like you and me! Thank you all again for coming and may God bless [America] [Lynyrd Skynyrd] [you; here's a tissue].