White propaganda, or a mature and scholarly analysis of Korean affairs? You be the judge.

by Cory Vaillancourt
View ProfileFacebookTwitterGoogle+RSS Feed
April 17, 2013 at 6:59 AM 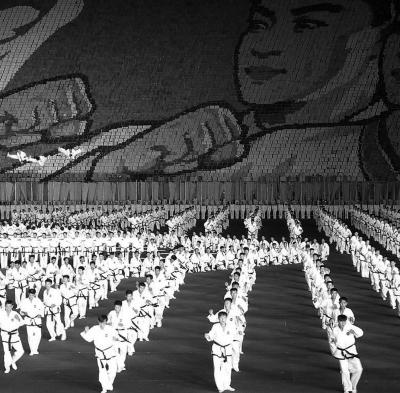 He was born in a rugged log cabin on a sacred mountain while his father fought a sacred war against savage imperialists. He learned to walk before his 30th day, and learned to talk before his 60th. During college, he wrote 1,500 books in three years and garnished that with six full operas because, well, just because. He also amassed over 20,000 VHS tapes during his life, probably largely consisting of Chicago Bulls games and John Waters' movies. So flawless was this man that he never even defecated. Ever.

Such was the perfection of the late Kim Jong Il, Supreme Leader of the People's Democratic Republic of North Korea; the first time he ever picked up a golf club, he hit 11 holes-in-one. The first time he ever picked up a bowling ball, he rolled a perfect game. And, to further reaffirm that his entire life was somehow specially scrutinized by  some sympathetic spirit, moments before he died Mount Paektu – the sacred mount upon which he entered the world – cast a burnished bronze glow upon the deep blues of the cold Korean skyline and then… it heralded a new age of truly irrational North Korean leadership with the thunderous reverberation of its icecap being torn asunder.

And if you believe all that, I've got a condo on Peach Street to sell you; it's in a really well-thought out development called "Ye Olde Inns of Arby Manor."

But die he did, Kim Jong Il, and when he did, he left us mere mortals with his son – the newly-minted leader of the world's only communist government governed by heredity succession, and lunatics.

And in recent weeks, it's become clear to everyone – due to his bellicose, juvenile flailings – that Kim Jong Il's son is trying to consolidate and establish his power within North Korea by acting like a goofball on the world stage. Kim Jong Il's son's name is Kim Jong Un; he's just as crazy as his daddy, and he's looking for respect.

So imma call him Lil' Kim.

It's appropriate; he comes from a long line of Lil' Kims. Lil' Kim's grandfather, Kim Il Sung, was the post-colonialist version of Watty Piper's "Little Engine That Could" – against all odds and facing off against US and UN troops, Sung (with significant help from China) managed to carve out his own little communist utopia built upon the backs of brutally oppressed peasants. He named it "The People's Democratic Republic of North Korea," hilariously.

If Kim Il Sung was "The Little Engine That Could," then his son – the deliciously insane Kim Jong Il – was the "Little Engine That Was Going Off the Rails On a Crazy Train." Kim Jong Il spent his power-solidifying early years attempting to plug that communist utopian fantasy into all sorts of eccentric outlets by propagating a ludicrous cult of personality that would have made Living Colour jealous. Also, brutality. Lots and lots of brutality. Places where they send you if your grandfather may have once said something "unpatriotic." Huge death camps full of dehumanized people forced to live like animals.

Anyway, as I said, the name "Lil' Kim" is appropriate in a variety of ways. That long line of Lil' Kims were all little, in a physical sense, like 3' 6" or something [citation needed]. And, Kim Jong Un's also little in a chronological sense – like 17 years old or something [citation needed] – which is right about that age when you think you know everything but you still shouldn't be fully trusted to run a convenience store, much less a nuclear-armed nation.

Or, at least that's what he wants to world to believe; he's more than happy to let our schoolchildren operate under the assumption that something fortuitous like "Red Dawn" or an A-bomb apocalypse might occur at any moment, sparing them from tomorrow's math homework. "Guerilla ambush tactics is your new math now," their math teacher would say to them. "Who here knows how to gut a pigeon?" he'd say.

Screw that, I say. Saddam Hussein wanted the world to believe he had real honest-to-goodness WMDs – not the completely imaginary ones he actually possessed – because he didn't want to appear weak in the region (I'm looking at you, Iran). Lil' Kim – same shit, different region – is looking at western-friendly South Korea and Japan.

Hussein ended up at the end of a rope because of his not-so-clever ruse. He bluffed, the international community called that bluff, and he lost everything. And he wasn't nearly as daft as Lil' Kim. Nor did he threaten to use these WMDs on Americans in America, as Lil' Kim did recently.

So where's the outcry?  Why is there no operation under way? Where's the coalition-building and the reporter-embedding and the troop-supporting by magnetic ribbon-purchasing?

They're North Korea's only friend. Which must be creepy as hell. Can you imagine listening to that "11 holes-in-one" story over and over and over again?

Big Red and North Korea are distant cousins; they share a common ancestor named Frederich Engels, who still encourages them to play nicely together. So you know Big Red's got North Korea's back, but Big Red hates North Korea, like that friend you have that you secretly loathe and want to face-punch all the time because they're always doing the exact one thing that should not be done at that particular moment in time.

They probably only hang out together because their moms make them.

Regardless, Big Red is super-sick of North Korea's shenanigans but China would still rather hang out with North Korea than a capitalistic, unified Korean peninsula.

And what, exactly – from the dawn of time to today, from the playground to Pyongyang – what  do bullies with something to prove usually do to get "respect?"