Stargazing and checking out the International Space Station

by Cory Vaillancourt
View ProfileFacebookTwitterGoogle+RSS Feed
July 24, 2013 at 8:00 AM 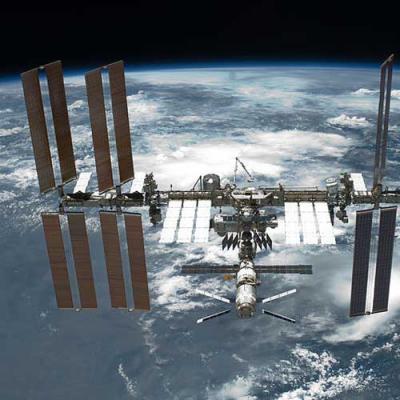 No, not everything is about you, Dave Matthews Band fans, so return to your barn-dancing and bad tattoo-acquiring.

But what would you say if I told you that satellites – in my eyes, like a diamond in the sky – were zooming through the clear Erie summer atmosphere, right above your head, all the time? What, you didn't know?

I think you did know. You've just never thought about it because you've been both under the table and dreaming.

So, know ye this: Zooming 400 miles above your head at almost 17,000 miles per hour, right this second, are approximately 3,000 hunks of metal ranging in size from that of a garbage bag to that of a garbage truck.

And the big stinkin' daddy of them all is the International Space Station. Which is significantly larger than a garbage truck.

Launched in sections and assembled beginning in 1998, the ISS is the size of almost 400 garbage trucks, which is a terrible analogy, considering that the ISS is considered the supreme technical achievement in the history of humanity despite the fact that we're still all quite obviously just proud monkeys. No disrespect to you, garbage truck, O noble hauler of refuse, regret, and bad decisions. You make everything new again. Everything.

Anyway, the ISS a habitable artificial satellite. It's logged more than 1.5 billion miles, contains almost 14,000 cubic feet of living space, and has hosted more than 200 human visitors – all while operating in one of the most extreme climates in existence. The temperature in space has been described as "not very warm" [citation needed], and brain-cooking radiation blasts forth from all corners of the cosmos, all the time.

Furthermore, as long as artificial satellites have existed they've had a tendency to outlive their usefulness and return to Earth as a burning exemplar of humanity's hubris. Even worse, sometimes they stray from their orbits and crash into each other, leading me to fear they'd crash… into me – like that Dave Matthews song "Crash into Me," except with less whining.

The North American Aerospace Defense Command estimates that between manslaughter-hungry satellites and stabby fragments thereof, there are about 8,000 objects greater than 10 centimeters in size, orbiting our earth, just waiting to fall out of the clear blue and jab you in the eye or some other awful place on your body. The head of the European Space Agency's Orbital Debris Office, Heiner Klinkrad (which is totally not a made-up name) recently told livescience.com "The annual risk of a single person to be severely injured by a re-entering piece of space debris is about 1 in 100,000,000,000."

Those odds are still too high for me, because if there's a 1-in-whatever-brazillians chance something crazy like that could happen, chances are it will. To you. Or me. And I don't know about you, but if it's gonna go down like that, I want to be stabbed in the front, not in the back; I want to look that jabber square in the eyes like a big eyed fish and feel that spiky satellite splinter strike. So ain't no durned International Space Station gonna sneak up behind me; in fact, I keep track of all of those ever-looming chunks of space murder, and you should, too. One killed a cow once.

Luckily, The National Aeronautics and Space Administration has a website to protect me. And you. And your cows.  If you go to spotthestation.nasa.gov/sightings and poke around a bit, they'll tell you exactly where it is at any given moment; even better, if you enter your country, state, and city into the 'Location Lookup' section, it will tell you exactly how and when to see it.

That's right – you can see the International Space Station with your naked eye. And it's remarkably easy. Even if you're tripping billies like a drunken soldier and just happen to be looking in the general direction thereof, there's no way you'll miss this thing. It is distinctly different from all other heavenly bodies you may come upon.

It does not blink or flash like an aircraft; it is slightly orangish in hue, because it employs no external lighting and is illuminated only by the reflection of the sun over the horizon. Accordingly, it moves at a speed befitting its status as a divine messenger, tracing an arc all the way across the sky and hastily heralding the impending arrival of Helios' solar-steed-drawn flaming chariot.

As you can probably imagine, I myself have seen this awe-inspiring spectacle times too numerous to recount, most recently, yesterday. It came at me from almost due north, and for a few terrifying moments that hunk of impending cosmic spike jabbery seemed headed right at me – until it harmlessly and silently passed directly over my head.

The entire encounter seemed like hours; in reality, it was but minutes. And I'm happy to report that I didn't get jabbed. But I was ready. And so should you be.

Over the next two weeks, there are several sighting opportunities available, primarily in the early morning hours. So if you're just waking up (or still awake) between 3 and 5 in the morning and have a decent, darkened view of the northern horizon – look up at the sky. Into the Bible-black firmament. Ponder humanity's ultimate role in the universe. Ponder your own role as one of the ants marching through existence. Then hide your cows. Then ponder the space between, and remember that you're so damn lucky just to be alive and it won't be long until the gravedigger is digging a ditch, and when finally we lie in our graves and say goodbye, grace is gone.

Or maybe that's just…too much.