Times are tough for state of traditional marriage. Thank goodness Upfront?s Cory Vaillancourt has some ideas to improve one of our most time-honored traditions! 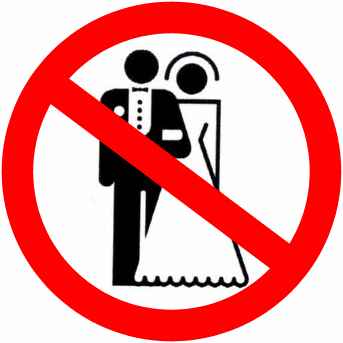 America's political leaders who are in opposition to gay marriage – Republicans, mostly – often refer to traditional "one man, one woman" marriages as a sacrosanct and cherished tradition, inseparable from our identity as a nation of strong families and strong values; therefore, they refer to same sex-marriage not only as a threat to national security, but also as a threat to traditional marriage.

I laughingly refer to that as a load of crap. You know what the real threat to traditional marriage is?

In our nation of strong families and strong values, 50 percent of first marriages, 67 percent of second marriages, and 74 percent of third marriages end in divorce, according to Jennifer Baker of the School of Professional Psychology at the Forest Institute in Springfield, Mo.

Thus, it is clear that traditional marriage is undermining a once-great America, which is certainly not because of all the homosexuals who are not allowed to marry each other; it is because of all the heterosexuals like me getting divorced. Therefore, logically speaking, I think the best solution for making America great again is to outlaw all marriage.

Now, as a pragmatist, I know that many of you may find this idea unsuitable for your needs. Therefore, I propose a solution that should make everyone happy:

A renewable marriage contract that is not a lifetime commitment.

Think about it. The old-timey notion of a man getting down on one knee and asking the woman of his dreams to spend the rest of her life with him and him alone is so antiquated and obsolete that it is useless, like the evolutionary relic of a vestigial tail on human beings. "Till death do us part?" Based on the divorce rates I cited above, that's apparently asking an awful lot; for who can foresee what the future might hold? Who knows how one might feel after the novelty of newfound love wears off, and the banality of familiarity begins to breed contempt?

Instead of the archaic scenario above, I can imagine a day in the not-too-distant future when two romantic free agents come to a reciprocal agreement that combines the best of marriage with the best of free-market capitalist contractual obligations. I can imagine a day when a man gets down on one knee, with his attorneys huddling vigilantly behind him, and says, "Darling, my sweetheart, the apple of my eye, I am in love with you, at least for now; wouldst thou do me the honor of signing a two-year exclusive contract with a possible option for a third year exercised by mutual acclimation?"

The easiest way to explain this concept is to compare it to the contracts signed by professional athletes. It is hard to imagine a hot prospect, right out of college, signing a lifetime deal with the first club that bats an eyelash at him; everyone involved knows that people change, and situations change, as do performance, motivation, and ability. For the best interests of all involved, there comes a time when that contractual relationship needs to be re-evaluated based upon what each party brings to the table. Knowing this, the parties sign an incentive-laden two-year deal. If your hot young prospect brings home flowers more than 20 times a year, they get an extra night out with their friends; if they turn up late at night, smelling like a stripper who crashed into a brewery, they get benched.

So, let's put this in perspective. You're dating someone, a wonderful prospect who you wouldn't mind spending more time with. You both agree to a 2-year marriage contract; after 18 months, things are going well. Based upon that past performance, both parties have grown to trust each other enough to expect that this relationship will continue to bear fruit long into the future; it is a good fit for both parties, marked by mutual appreciation, respect, and love. Just like a quarterback in a contract year, if you like the contract you've signed, and you know it is up for renewal at the end of the season, you will try to score as many points as possible in hopes of landing a long-term deal. Before your current contract expires, you begin working on a long-term deal that could conceivably allow you to spend the remainder of your romantic career in the same arena. You might even get your jersey retired.

Conversely, if you are still unsure about the viability of such a relationship, you could negotiate a series of one-year deals, taking things as they come. If it does indeed work out, the possibility for a new contract always exists; however, if you are interested in exploring the free agent market, you could demand a trade, or simply slog through your contractual obligations until the expiration of that pact and become a free agent again. And in the end, if it doesn't work out, hey, no hard feelings, best wishes with your new club.

Cory Vaillancourt is a brilliant writer/complete hack and can be complimented/heckled at cVaillancourt@ErieReader.com. He is also a recently released free agent who was given his unconditional release almost a year ago, and is entertaining the prospect of short-term contracts that may have the potential to lead to long-term deals. If interested, contact his agent, Jerry McGuire, or email him at the address above.