Upfront: The New Bill of Rights

No, this isn't the constitution for The Most Serene and Badass Republic of Upfrontia. Cory took the Bill of Rights and spruced it up a bit.

by Cory Vaillancourt
View ProfileFacebookTwitterGoogle+RSS Feed
September 28, 2011 at 8:46 AM 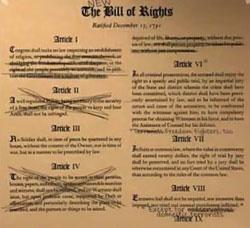 No, this isn't the constitution for The Most Serene and Badass Republic of Upfrontia. Last Monday, I was listening to my favorite AM radio program ? Jim & Barry on AM-1400, which I happen to think is one of the best morning talk shows in the country (the United States, not Upfrontia).

Those of you who know my story are familiar with my expertise in the matter; having lived all over the country working in politics, I?ve heard dozens and dozens of local stations attempt this format with varying degrees of success, and few pull it off as well as these two. I like that neither one of them takes any shit from their audience; however, everyone gets their chance to weigh in with their stupid backwards opinion, and these guys just sit back, waiting to nail them on the fabrications, distortions, and outright mistruths that litter talk radio. Barry, the lefty, is not outrageously liberal; neither is Jim, the righty, outrageously conservative ? a perfect combination for a county that has a fairly moderate voting record, from county commission on up to U.S. Senate.

Anyhow, some caller called in (duh) and asked Senator Toomey, the morning's guest, why all the housing projects come pre-wired for cable TV. This question has been asked many times, in many places, in many different forms - why are people with food subsidies allowed to buy Cheetos and Kool-Aid? Why is the Medicaid patient showing up for her appointment with a $200 nail job? Even the recent welfare-drug testing debate is really just an extension of this question - should people receiving entitlements such as these be allowed anything but the barest of necessities?

Of course, Senator Toomey did not grace us with some brilliant original insight. I don't even recall what his answer was, but I'm sure it was nothing as committal as, "You're right, caller, and we're going to take all that shit away from them pronto!" While enforcement of such stipulations could be tricky, the quickest way to ensure your defeat at the polls is by threatening to take away someone's cable television, so I?m guessing Toomey just shut the hell up.

This topic spilled over into a Facebook chat I had with a few of my friends, one of them a realtor/landlord, another, a member of the Upfront legal department. Both jokingly (?) remarked that people now view cable television as a right, and our counsel went so far as to tell me that it is in the constitution (I still can't find it). So, I took the Bill of Rights, spruced it up a bit, and put the TV thing in there. I think it's a major improvement; a more accurate reflection of reality. Read it, and tell me what you think in the comments section. Now if we could get this ratified by 2/3 of the states, we'd be all set.

Congress shall make no law respecting an establishment of pay television, or prohibiting the free acquisition thereof; or abridging the freedom to watch yet another Jim Belushi sitcom, or a movie about rapists, stalkers, or rapist stalkers on the Oprah Winfrey Network; or the right of the people peaceably to assemble to watch the Steelers when not blacked out (the game, not the fans), and to petition the Government for more nudity and cussing on basic cable.

Right to keep and bear smartphones

A well-regulated 3G network, being necessary to the sending of mass chain-mail texts and photos of our cats in silly situations, the right of the people to keep and bear data, shall not be infringed.

Conditions for quarters in parking meters

No commuter shall, with lack of quarters, be required to put quarters in any parking meter, without the consent of the commuter, except in time of plenty, like when you just left the casino with a bucket full of them.

The right of the people to be secure in their lattes, coffees, macchiatos, and mochas, against unreasonable wait times and long lines of customers, shall not be violated.

No talentless loser shall be held to answer for a reality show, or otherwise infamous HBO special, unless on a presentment of a new clothing or fragrance line; nor shall any person be subject for the same offense to be twice put on Celebrity Jeopardy with Sean Connery; nor shall be compelled in any criminal case to be witness to YouTube videos of people getting kicked in the balls, nor be deprived of TV, latte, or Wi-Fi, without due process of law; nor shall private property be taken for public use without just compensation, unless it is a celebrity sex tape or nude cell phone photos.

In all criminal prosecutions, the accused shall enjoy the right to a speedy and public book tour, by a partial jury of Nancy Grace and People Magazine, regardless of wherein the crime shall have been committed; to be consulted by the director of his or her made-for-TV movie; to have compulsory process for obtaining coverage on Court TV; and to have the assistance of a Hollywood agent for his or her Marketing and Public Relations.

Right to a trial by jury

In suits at common law, where the value in controversy shall exceed twenty dollars, the right of trial by mixed martial arts cage fighting shall be preserved, and no ass kicked by a cage fighter shall be otherwise re-kicked in any cage of the United States, than according to the rules of common ass-kicking.

Excessive bail shall not be required, nor excessive fines imposed, nor cruel and unusual punishments such as songs by Nickelback or Maroon 5, be inflicted.

Rule of construction of Constitution

The enumeration in the Constitution, of certain rights, shall not be construed to deny or disparage others retained by the people, including talking loudly on your cell phone in a crowded restaurant, talking up the entire sidewalk while slowly strolling, or failing to use your turn signal.

Rights of the States under Constitution

The powers not delegated to the United States by the Constitution, nor prohibited by it to the States, are reserved to the States respectively, or to the people, unless the Federal government gets a bug up its ass and begins kicking down the doors of cancer patients smoking reefer.