Upfront: The Spider that Became a Beautiful Butterfly

This is the 63rd week in a row that I?ve had the pleasure of addressing you, dear Reader readers. That?s roughly 63,000 words I?ve pushed out of this bully pulpit called ?Upfront,? the equivalent of a short novel. If you were to go back and read them all, just like a novel, you?d find recurring themes that permeate that novel as well as permeate our city, our region, and our culture. You?d also creep me out just a little bit, because, come on, who would do that?

by Cory Vaillancourt
View ProfileFacebookTwitterGoogle+RSS Feed
July 25, 2012 at 8:30 AM 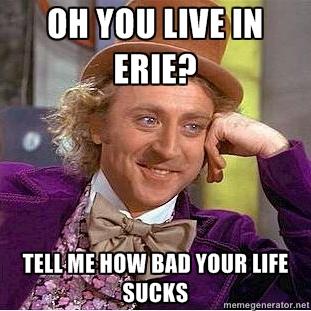 This is the 63rd week in a row that I've had the pleasure of addressing you, dear Reader readers. That's roughly 63,000 words I've pushed out of this bully pulpit called "Upfront," the equivalent of a short novel. If you were to go back and read them all, just like a novel, you'd find recurring themes that permeate that novel as well as permeate our city, our region, and our culture. You'd also creep me out just a little bit, because, come on, who would do that?

Those recurring themes – be they veiled in glittery bacon unicorns or awash in the artificial light of glowing rectangles with footballs on them – they are woven together in an intricate, delicate, transparent web. Those recurring themes – be they brain drain or economic misadventure or cultural ignorance – they are the anchors of this cobwebbery, and at the center, in the middle of that silken lattice lies a big scary creepy spider.

Last week, Adam Welsh and I were on Jet-1400 AM radio with James R. LeCorchick. Jimmy asked me, as an "outsider," about my pre-conceived notions of Erie – I had none – and about my observations of Erie, in this, my fourth year living here. Without really thinking about it, I told him, "Erie sure does like to beat itself up," which I truly believe – I've never lived anywhere that has a population so adept at overlooking the good and concentrating on the bad. I've also never lived anywhere that has a population so inept at merging onto a highway, but that's not important right now.

What is important right now is that this brief exchange revealed to all of us that fair Erie – that vivacious vital vibrating vivid vixen – is a treacherous and beautiful spider-woman, alluring and dangerous. She is both architect and inmate of her own perilous prison, and she loves to eat her own.

So listen up, everybody – it's time to clear the cobwebs and let that spider spin herself into a cocoon and become a beautiful butterfly, which a reliable source once told me they are capable of doing. In a stunning move of political and linguistic judo, we need to find a way to turn our frowns upside-down, using the weight and momentum of our adversary – Erie's "problems" – against itself.

Hey, that's it! Erie Problems! Problems suck! What if we flipped that perception and made light of a really great set of problems? Kind of like the popular "first world problems" memes, which are defined as "frustrations and complaints that are only experienced by privileged individuals in wealthy countries," according to Cheezburger.com; it's stuff like "My iPhone battery is dying and my charger is all the way over there," or "I ate too many sandwiches at lunch and now I'm sleepy," or "I can't find a parking place for my BMW SUV that's close enough to the bar's entrance."

While Erie – the city, not the treacherous and beautiful spider woman – is not exactly "privileged" or "wealthy" relative to other cities across the nation, we are blessed with many privileges and riches that people across the nation, and even just down the road, are right to envy.

It's pretty affordable to live here – as long as jobs continue to be created. We have clean water – until someone fracks that up. We have clean air – until we start burning tires. We have a huge and beautiful state park so unique that it should probably one day become the Commodore Oliver Hazard Perry National Park. We have free outdoor music eight nights a week – don't quote me on that exact number – and a mushrooming creative community that excels in music, dance, art, film, and literature. And, once global warming melts all the ice caps and turns the southern United States and much of the world into a barren Mad Max-style wasteland, we'll be sitting on a lush, tropical lakeside Eden.

Doesn't all that suck?

Yep, those are Erie Problems, every one of them.

So, from now on, when you do or see something really cool in Erie, and you feel the need to tweedle it on Twitter, label it #ErieProblems. Here, let me hold your hand and walk you through a few of them, until you get the hang of it.

I sat in traffic for 5 minutes on before I saw the Wailers, for free, at Liberty Park as part of the 8 Great Tuesdays series. #ErieProblems

I need to buy more sunscreen for the 20 hours of live music I'm going to inhale at the Erie Art Museum Blues and Jazz Festival. #ErieProblems

I got so much sand in my shoes at Presque Isle Partnership's "Best Summer Night" with Crosby, Stills, and Nash. #ErieProblems

The Zambelli International Fireworks display at the Perry 200 Picnic in the Park went on forever! #ErieProblems

I've been out doing something cool the last five nights in a row, and it's only Tuesday. #ErieProblems

Fact – only the polar icecaps contain more fresh water than the Great Lakes –but not for long! Take that, stupid glaciers! #ErieProblems

Get the hang of it? Good. I'll be looking for your #ErieProblems on Twitter, and if this meme gets off the ground, we'll have gone a long way in helping sweep away that cobweb of recurring fallacies while also helping the big scary creepy treacherous beautiful alluring dangerous spider-woman become the happy fluffy butterfly she wants to be. Then, perhaps one day, Willy Wonka will follow suit with, "Oh, you're from Erie? Tell me how much your life sucks."