by Cory Vaillancourt
View ProfileFacebookTwitterGoogle+RSS Feed
February 1, 2012 at 11:37 AM 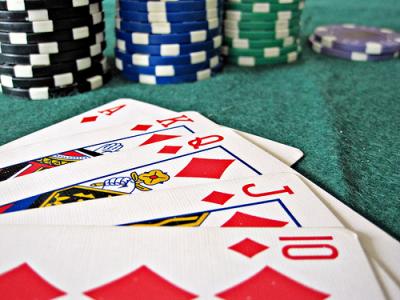 Two years ago, President Barack Obama said, "If I don't have this [economic recovery] done in three years, then there's going to be a one-term proposition." Part balls, part bluff, the first clause of his quote implies, "Of course I'm going to play my cards better than any president in the history of presidents," while the second clause of his quote implies "I know I am not standing pat with a pad hand."

It is still unclear whether this will indeed be a one-term proposition for the president; while conservative radio hosts have been praying for him to fold since the day he was sworn in, it's anyone's guess as to how this hand might shake down. Campaigning, you see, is a lot like a poker game.

In poker, outplaying someone is different than simply defeating someone; the person who is the best player can, and often does, defeat the person who holds the best cards. Blackjack is different – you can't out-lie or out-spend your opponent, and you can't argue with the numbers on the cards on the felt. A poker game is not always won by the strongest player, just as a campaign is not always won by the best candidate.

Don't get me wrong – I'm not asking for sympathy for Gore or Kerry, because, as Jerry Garcia says, sometimes the cards ain't worth a dime if you don't lay 'em down. Additionally, Senator John McCain had the same hand as then-Senator Obama in 2007, but foolishly chose to go all-in on an unsuited Queen, which got him flat-busted.

President Obama does, however, have at least one ace in the hole – he knows his eventual opponent will not be of the caliber of player that he is. Whatever card waits patiently on the river, after the flop and the turn, he will outplay them or out outspend them. Because, in the end, the half-billon dollar Obama campaign hasn't even put their chips on the table yet.