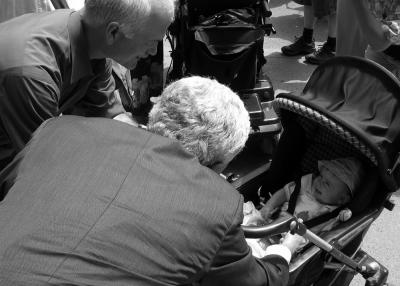 Psssst… Hey, buddy. Yeah, you. C'mere. Over here, away from prying eyes. C'mon, I ain't gonna hurt ya; I just wanna talk. I heard you're thinking about running for political office here in Erie County.

Well, I wanna help ya – because I like ya. I'm a political professional with more than a decade of experience, as you can probably tell by my tan London Fog trench coat and the way I'm standing here in this alley in the dead of night, chain-smoking cigarettes.

I've advised myriad people on what it takes to run and to win, and have scored some major wins in my career. But I've also made every mistake in the book and learned from each one of them – all on someone else's dime.

If you wanna soak up some of the benefit of that experience, listen up: Politics is a game, in every city, in every state, in every town across this great country of ours, and Erie is no different. That's right, just think of it as one big expensive, intensive, laborious, frustrating, high-stakes game. And there's no reset button.

Hey, buddy, where you goin'? Come back – I wasn't finished. Listen, the plan for winning this game is almost always the same, anywhere you go, but surprisingly, most first-time candidates think they know better.

Don't be that candidate.

Running for office is a lot like playing a sport. Successful candidates don't just step onto the field and learn as they go. Either they know the rules, the issues, their opponents, the terrain, and their ability to fund themselves, or they hire someone like me to tell them. I know what works and what doesn't; a political campaign is no time for improvisation or untested methodology. We use the tried-and-true techniques of our trade. We will come up with a game plan; only then are we prepared to play.

Pull up some concrete; the formula is simple - every candidate does basically the same things, everywhere. Nothing fancy, nothing new. The only real challenge is fundraising. The first thing you do once you're a bona-fide, certified, qualified candidate is start reaching out to your marks, errr, I mean, your donors. Make a list. Start with the people closest to you: family and close friends. Branch out to friends and associates. Neighbors. Acquaintances. Acquaintances of acquaintances. Your third-grade class.

Now, call them all and ask them for money.

That's the only way you're going to be able to fund the essential operations of your campaign – your door-to-door, your TV and radio buys, your staff, your mail and lit pieces, your door hangers, your yard signs, buttons, stickers, paperclips, your walkin' around money – everything.

Oh, you don't feel comfortable asking family members and random strangers for money? Okay, maybe I was wrong about you. It has happened before. Rarely. I'm sorry I've wasted my time. I'm done with you now. Best of luck to ya; okay, buddy?

What's that, buddy? You think you can raise how much? C'mere. No, over here, away from prying eyes. And ears.

In order to contact the amount of voters you need to secure the amount of votes you need to win, you're going to be phoning and walking every precinct in your district. Recruiting volunteers for your campaign is crucial, as many hands make light work. Plus, it's nearly impossible for any one person to make all of those voter contacts all by their lonesome. You could hire rowe-bits to do your phone calls, but the jury's still out on their efficacy; and in the end, nothing beats good ol' one-on-one human interaction.

But you will be doing a lot of walking. Candidates I've worked with in the past have lost 10 or more pounds. So buy a new pair of sneakers. Don't worry – it's a time-honored tradition for American political candidates to show up on a voter's door asking for support. You'll be swell. You'll be great. Oh yeah, go buy a can of mace. Don't ask why. Just do it.

This is the grassroots phase of your campaign – shaking babies and kissing hands, as they say. You're knocking on targeted doors. You're planting yard signs and claiming territory like a conquistador expanding the realm. You're recruiting volunteers to spread the good word and convert the heathens. You're building a legion of supporters to storm the polls on Election Day.

On that day, you'll call to remind 'em that it's Election Day. You'll remind 'em they promised to support you. You'll ask 'em if they voted for you already. You'll ask 'em if they know where their polling place is. Hell, you'll even offer to drive 'em there; I don't care – rent some vans. Whatever it takes. This phase of your campaign is called GOTV, or "Get Out the Vote." But I'm getting ahead of myself.

Now, some of these folks will vote by absentee ballot. The deadline to apply for that ballot is May 14. This is bad for our business; it increases the number of voter contacts you need to make, therefore, also increasing the overall cost of your campaign. But luckily, turnout is still so pathetic that you only need to convince a few hundred people to vote for you in most of the primary elections taking place this cycle.

Yeah, it's true. Some of these Erie County Council primaries will be won or lost by a few hundred votes. Same with the Erie City Council. Damn shame, really. My grandfather walked from Australia to Okinawa with a 70-pound cellphone on his back and watched his buddies die on a daily basis during World War II, and his brother was blown off the deck of the USS Franklin by a Japanese Kamikaze attack, all while fighting for our right to practice this participatory democracy. Our boys are over there right now, in Asia, in the Middle East…and more than 70 percent of people won't vote and therefore don't care.

God bless these people. No, not the troops, dammit – the lazy slobs who don't vote. They make it easier for us to carry out our work.

Anyhow, make sure people that want to vote absentee get their ballot in by May 17, or else it won't count. Keep a list. Call them all the day before and remind 'em.

Near the end of the grassroots phase of your campaign, begin running your TV and your radio spots. IF you have the money. And IF your opponent didn't buy them all up already. The hallmark of any strong campaign is the ability to afford these luxuries; while not expensive in and of themselves, the amount you must purchase to effectively spread your message adds up quickly into dozens of thousands of dollars depending on the size of your district – you can't throw a pebble into an ocean and expect to see a tidal wave. Properly targeted advertising wins most campaigns. Properly targeted advertising is expensive. And if you can't afford properly targeted advertising, well…do the math; you're sharp. Just remember this: campaigns aren't won, they are bought.

What's wrong, buddy? Skeptical? I get that a lot. Unfortunately for you, there's no way to tell that I'm right about this simple formula until it's all over. Then you'll see I'm right. Like I said earlier, there's no reset button on this game.

So there you have it, buddy. Still interested? Yeah, okay, I understand. Listen, think it over, and check back with me in a couple weeks, and let me know. I'm confident you've got the tools needed to play the game.  You now know what it takes to run a campaign.

I forgot to tell ya, in all fairness, if, you run, you'll be expending all of this effort for the worst possible job in the world. You didn't know? You'll spend far more time involved with it than you think. You'll earn a fraction of what you could in a similar job in the private sector, seeing as how you'll basically be making decisions on the business aspects of a decently-sized corporation, which is all any city or county really is. A corporation.

Your life will be subject to a higher degree of scrutiny than you ever desired. I've seen people crack under the stress of having not one boss but several thousand bosses – their constituents. I've seen reputations tarnished. I've seen marriages ruined. Enemies made. Fortunes lost. Indiscretions. Scandals. Assaults. Indictments. And that's just amongst the winners.

But the worst part about it all? You may like it. You could end up eating it, sleeping it, smoking it, snorting it, shooting it, and becoming addicted to it. Happens all the time actually; just look around.

You need to decide if this is indeed for you. You'll interact at the highest local levels of power with the most intelligent amongst us, and you'll also field calls from people who are absolutely out of their mind. Also, I forgot to tell you:  watch your back. As you are making your decision, you'll meet some of the most deceptive, dishonest, disingenuous, deceitful, devious denizens ever to stain this shiny blue ball.