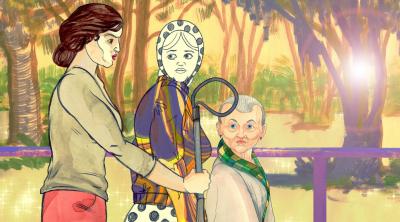 Thanks mainly to Disney and Pixar, many American audiences view the medium of animation as something that's strictly for kids. This is unfortunate as there are plenty of complex, provocative, and mature stories that would best be suited to the craft, but they can't reach a wide enough audience. That's why Dash Shaw's (My Entire High School Sinking Into the Sea, and graphic novels like Bottomless Bellybutton and New School) new film Cryptozoo intrigued me. The premise feels like something straight out of Disney but the film itself is far from that. The result is a mind-bending visual experience but sadly something that's often lacking in story and character.

Lauren Gray (voiced by Lake Bell) is a woman obsessed with finding cryptids (animals that only exist in myth and folklore) and bringing them to an elaborate nature preserve that she hopes will help people better understand them. When she and her team go looking for a strange creature that eats dreams, she is confronted by government agents who want the cryptids as weapons, endangering her life and forcing her to confront whether her own intentions for cryptids are entirely noble.

The animation is an absolute feast for the eyes, somewhere between shadow puppets and a psychedelic acid trip. During the adventure scenes in the zoo it becomes a spectacle like Jurassic Park meets Ralph Bakshi. Sadly, the story and characters don't get as much attention. The film creates such a fascinating world but doesn't give us enough time to just take it in. The story about the fine line between preservation and exploitation is intriguing but there's not enough time to ponder those ideas. Cryptozoo is a feast for the eyes but I wish there was more for the brain to chew on. — Forest Taylor