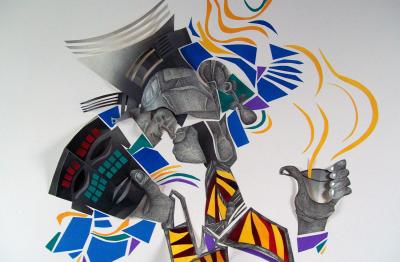 The first thing that you ought to know about this exhibition is that it really starts at the circulation desk located on the first floor of the Nash Library of Gannon University. There you can pick up a CD player and headset, which plays 14 minutes of commentary--a print version of which is also posted in the gallery – in the voices of Craig Matis, the artist, and Raphael, his son, as well as voices for the other characters of the story with some sound effects.  You can certainly go through the gallery without this, but picking up the CD as you come in gives the exhibition an additional dimension and poignancy.

Mr. Matis says that the start of such multimedia work was with exhibitions he had done with his band, but I think that there is another root here. Having a child with a learning difference undoubtedly has made him sensitive to various ways of obtaining information. Some people acquire insights by seeing, some are auditory learners, some do better with reading, and some with a combination of approaches. All are possible here.

Autism is an interesting set of alternative brain processes. No two experiences are alike, but in general, persons with Autism tend to be so hyperaware, without the filters that other people use to prioritize or shut out stimulus. They can become overwhelmed and often "shut down." For those who are able to attend mainstream classes, there is the challenge of listening to the instructor to gain necessary information while hearing the incessant electrical hum of the lights, the fan blowing, noises outside the window, experiencing the close proximity of other students, the cologne of a neighbor, and the constant scratch of the label inside the neck of the shirt he or she is wearing – all without the ability of shutting out any of the unwanted stimulus.

Parents of autistic children as well as persons with autism I have known all say that while they would like to have some of the more unpleasant symptoms better controlled, the difference of the Autistic mind is so integral to their being that they wouldn't want to make them un-autistic. Some scholars have suggested that every societal advance has come from someone displaying autistic tendencies and that without autism the rest of us would still be sitting in caves trying to make fire.
There is a sense of Raphael's own challenge in the narrative, but also Mr. Matis seems to have captured, as well as any person without autism could, something of the perceptions and experiences of an autistic person in his art.

The pieces, a set which together tell a story, are constructed out of paper, spot-glued to a base that allows the snippets of folded paper to bow out – making them at once two and three dimensional – which are then placed in constructed shadow boxes.

If I have any criticism, it is that I wanted to see more, both so the gallery was better utilized, but also because I selfishly wanted to experience more of the array of insights this exhibition afforded me.

These pieces tell the story of how Luisa Matis, wife and mother, passed away, and how a father and son took a trip to Mexico in order to help to process their grief.

"I am always looking at patterns," relates Raphael, and that is reflected in these pieces. The majority are brightly colored patterns reflective of Mexican textiles. These include images derived from Pre-Columbian masks, sculptures, and other references. You may be able to find an Aztec god, a Mayan head, and even a Jaguar. The skin tones are delicately modulated in graphite gray, in fragments that become evocative abstractions.

The bright colors and patterns are an ordered cacophony and overwhelming. In Panel 11, there is a jagged Mexican pattern that I found optically vibrated, all of which gave me some limited insight as to what the autistic experience must be like for some individuals.

There are some coloristic exceptions. In Panel 4, "Mommy Was Very Sick and Sat All Day in a Wheelchair in the Hospital…," the palette is entirely gray with a hint of red around the heart, and the figure is fragmented and distorted, which is appropriate, as anyone who has personal experience with "Mommy was very sick" will understand.

About halfway through, the story shifts as Raphael falls asleep and has a dream of his mother coming to him as a little girl dressed for her First Communion and leads him through a number of adventures. In general, the visual tone also shifts and the images leave the overall loud mosaic patterns to a more peaceful compositions utilizing white space to a greater degree. In Panel 13, the image curves and curls like the steam of the tea that the old man is drinking.

Here there are also unique cultural perceptions; the Mexican Day of the Dead, for example, or that, "the Zapotecs have an ancient belief that each person is born with a certain amount of energy, which is used up in life. Sadness and anger waste this energy."

At the end, Raphael wakes up but his father doesn't ask, "Did you have a nice nap?" or "Did you have a dream?" but rather "Where did you go, Raphael?"
His son responds "I was with Mommy."

And I think probably he was.