In short, Luke Gehring says this is a big deal?a very big deal, and if you could only see one local show this year, this is the one not to miss. Read on to see why he says so. 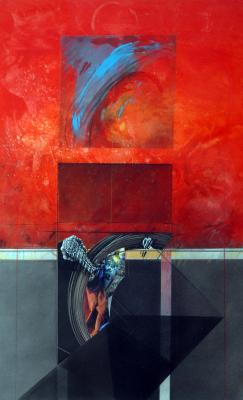 Over the past several years, the Northwestern Pennsylvania Artists Association has shown its interest in the revitalization of downtown Erie and its ability to mount wonderful shows in alternative spaces, including a renovated factory and an empty storefront. At the "Nutz and Boltz Exhibition," the first of these alternative-space shows – which is still being talked about—viewers walked around gob-smacked, muttering, "This is a New York show; why haven't we been able to see shows like this in Erie before?"

Now the Housing And Neighborhood Development Service, which is committed to the promotion of the arts as an essential part of its quality of life programs, has partnered with NPAA by providing 3,900-square-feet of bright, open airiness for an exhibition. This exhibition is also being held in conjunction with the Governor's Awards for the Arts, representing the Commonwealth's highest level of excellence in the arts, which is being held in Erie for the first time ever.

Each artist is allowed two pieces of what he or she thinks represents his or her best work, un-juried, uncensored, and unrestricted in any way. Here, you will find the very large and the very small, as well as work of every discipline: painting, photography, fiber, assemblages and found objects, sculpture and pottery, prints, drawings, and installations. If I forgot something, it is probably there too. You are bound to find the comfortable but also pieces that will make you stretch your perceptions a little.

An example of the former is Mary E. Miller's watercolor still life "The End of the Rainbow." But one would be wrong to pass over this as just a pretty picture of fruit. As the title suggests, this seemingly simple composition is all about color, using color complements (opposites, which when placed together, heighten the hue's vibrancy), the yellow-to-orange fruit with a blue-to-violet bowl and table top and just enough neutrals to keep them balanced.

The Lisa Austin pieces may cause some people to feel less sure of themselves because these are documentations of site-specific environmental pieces. Rather than shortchanging yourself, spend some time with these pieces and the possibility of seeing art as more than just a decorative device may open up to you.

One of my favorite Michael Tkach photographs, "Eclipse," is not only a great figurative composition but also a lesson in the viewer making false interpretations. Michael told me that people keep commenting on the Cruciform, Christ-like quality of the figure. And while the viewer is free to make this association, it was not his intent. "It began with the model and the red fabric, which I found very powerful, and the image evolved from there." He found this piece of pitted floor, which reminded him of the moon, and laid out the figure and fabric, billowing around the head, swirling over the thighs and back around the legs.  While in art the placement of a swag of drapery over the pubic area often serves to call attention to that area, it serves more as a way to enhance the suggestion of weightlessness as this powerful figure passes between you and the moon, an idea of space and eternity, in this case.

The artist who gets into more juried shows than anyone I can think of is Passle Helminski, represented here by one of her famous hanging fiber sculptures. This one, "Life?," has a texture that is rather feathery, or perhaps scaly would be truer, as the piece is folded over on itself in a shape suggesting a fish to me. Beyond the possible animal reference, what Passle's sculptures do, especially if one is privileged to see several together, is interact with the space – floating or swimming in the space as air currents move them, casting abstract shadows on the walls and floors.

You never know what Nan McCarthy Salvatore is going to do next, as in this assemblage of such unlikely materials as a wooden leg, a spinning plate, and "the fickle finger of fate." In "Fate vs. Chance," with a "Wheel of Fortune" reference, the plate is marked with I Ching hexagrams. Spinning the wheel, Nan related, "If the man hadn't lost his leg, he would have married, if he had married…well… you get the idea."

Here the intrepid viewer will find a visual adventure waiting. This is also an excellent opportunity for collectors, who will find exceptional examples of what is not yet in their collections that should be. And with NPAA only taking a 20-percent commission, nearly the entire purchase price goes directly to support a living artist, with the small remaining percentage going to the organization that made this – and future shows of this caliber – possible.

In short, this is a big deal—a very big deal, and if you could only see one local show this year, this is the one not to miss.

The Creative H.A.N.D.S exhibition runs from Sept. 6 through Sept. 29, at the H.A.N.D.S. Corporate Headquarters (formerly the Erie Sports Store), 701 State St. Gallery hours: Wednesdays through Fridays noon to 5 p.m.; a special VIP reception for NPAA Members and guests of the Governor's Award will be Sept. 21, 5 to 7 p.m. followed by a public reception from 7 to 10 p.m.