Though some people may find it odd to say, Carol Posch Comstock is one of the most controversial artists in Erie. 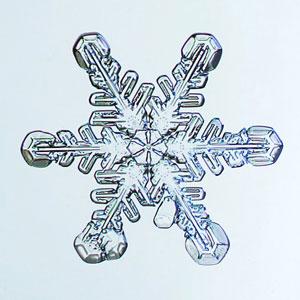 Though some people may find it odd to say, Carol Posch Comstock is one of the most controversial artists in Erie. Opinions of her work range wildly from her being "the premier regional Feminist artist" to a "purveyor of pop new-age imagery" to "greatly overrated" depending upon to who you are talking with and probably the comparative state of their digestion at the time. Regardless of the opinion, I know of no one who believes that she doesn't take herself or her art very seriously.

Her work has ranged from fiber art and jewelry to sculpture and photography. With such a wide range, I thought I had seen everything. This show, however, took me by surprise.

They are, in fact, digital photographs, of individual snowflakes, using the Giclee method of printing. With this process, you have to give her her due. She works with a "rig" that her husband, Dave, built for her, comprised of a digital camera connected to a microscopic objective and elongated extension tubes and LED lights with colored gelatins. And given the subject matter, she is working in below freezing temperatures. She has even corresponded with Kenneth Libbrecht, professor of physics at California Institute of Technology and a snow crystal photographer, for some technical advice, though of the two, the quality of Professor Libbrecht's photography is far superior. With this technology at her command and her commitment—even in such extremes—one would hope that three seasons of work would have produced a more interesting exhibition than this show actually affords.

It is said, "no two snowflakes are alike." There is, however, no scientific basis for this assertion. To the contrary, science these days asserts that there may be no uniqueness in nature at all, making the above statement the scientific equivalent of an urban legend. So Carol can be forgiven for repeating some of the same snowflakes within the gallery. And additionally, these prints show that the geometry of a snowflake is not always perfectly symmetrical, as we may have been led to believe.

Snowflakes naturally become compositions of lines, and various lines carry with them different characteristics. Horizontal and vertical lines are stable and static, while diagonals are the most dynamic, adding movement and speed--among other things--to an image. With a snow crystal, you naturally have both and in balance.

Some of the images give the effect of the snow being made of crystal prisms. There is also some subtle coloration at work as well. Some are reminiscent of clay tiles, though I believe the color texture of a glazed tile would be more interesting.

Initially I was struck with the notion that the hanging images had all the clinical appeal of pinned and framed butterfly specimens. Even if one is cataloging scientific specimens, one can go beyond forensic drawing to real art—John James Audubon being the best example. Perhaps an exhibition of framed antique lace or "Scherenschnitte," a vanishing cut paper art form, bare closer similarities to this show, though frankly I would have rather been looking at either fine quality handmade lace or the intricate cut paper.

There are a couple of images that did stand out for me. "Lake Effect Lace" has the missing portions of the cropped photo delicately drawn on the matt, illustrating creative thought at work. "Blue Freeze" is a cropped image providing a satisfying composition in indigo shifting to ultramarine with pink highlights. "Sublimation," which is produced on fabric, has stitching carrying through and extending the "drawing." However the effect is one suggesting melting rather than sublimation, which is the process of direct transformation from a solid to vapor without a liquid stage in between. "Lake Effect Lace Falling" may be signaling a shift in manipulating the image in that there are multiple flakes represented. However, with the silver-white background and the blue and green tinted flakes, it is reminiscent of nothing as much as Christmas wrapping paper.

What seems lacking here is some basic compositional devices, such as contrast and overlapping, for example, which, assuming that the medium allows it, should make for stronger works. The potential is there, but in general, this show "left me cold."