Visual Experiences: Mindoka On My Mind

The works of Roger Shimomura 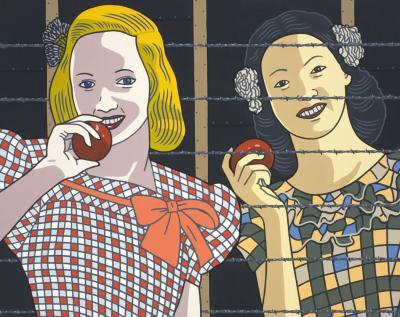 This exhibition of the work of Roger Shimomura is one that I have been eagerly awaiting. In part, this is because of my love of Asian art, and in part, because of the way the subject matter intersects significantly with my family history.

With the entry of the United States into World War II, Japanese-Americans had their property confiscated, in most cases never to be returned, and with no more than a suitcase in hand, were stripped of all rights of citizenship, rounded up, and sent off to relocation camps. Behind barbed wire and under the watch of guard towers, they were crowded into barracks.

The culture shock of an intensely private and modest people placed in a situation without privacy or decency cannot be underestimated. In some cases, they were used much like slave labor, building infrastructure—roads, waterways and sewers—to improve Native American Reservations where some of these camps were located. They tried to live as normally as possible and often expressed themselves in poetry and the visual arts, using whatever materials they had at hand.

A third generation Japanese-American, Mr. Shimomura was detained with his family at Camp Minidoka from 1942 to 1944. In all, some 120,000 people were moved by the War Relocation Authority to 10 concentration camps.

His grandmother, who was ineligible for citizenship under the Asian Exclusion Act, kept a diary, upon which this series is largely based—though some clearly come from the artist's own impressions.

My parents were not much more than newlyweds when war was declared with the Empire of Japan. The family story is that my father had just come in from shoveling snow, was putting my older sister in her high chair, and was about to say grace over the Sunday meal when the announcement of the bombing of Pearl Harbor came over the radio.

Later, my father was drafted into the U.S. Navy and assigned to the USS Ross, the worst disabled ship of the war, receiving three attacks and remaining afloat.

My mother was a founding member  of her local Baptist church, which borrowed Seminary students from Bethel College to act as interim ministers. This is how my mother first came in contact with Nisei (second generation Japanese-Americans) men let out of the camps on in-country visas to go to college and volunteer to train at Fort Snelling, Minn., for the 442nd Infantry to defend the country that had disowned them.

There was a need for "counselors" to help these young people who founded the Nisei-Caucasian Christian Fellowship and my mother stepped up, becoming a big sister to the guys, and counselor and chaperone to the girls. She helped get these women released from the camps to come to work in such places as Sears for such menial jobs as silk stocking repair girls. She wrote to their families back in the camps and tried to get them aid when the Nisei couldn't. She also led Bible studies, traveling hours by bus to get to the girls' dorm. She was no stranger to prejudice, having grown up with the "dumb Swede" stereotype and later working as a live-in domestic for a wealthy Orthodox Jewish family. But she had never experienced before the open hatred she received as she walked from the bus stop to the girls' dorm.

It is part of my family's history that I am intensely proud of.

At the end of his life, my father told me, with great emotion, that coming home from the South Pacific to my mother's church and seeing services led by Japanese-Americans and learning of her role in their lives drove a wedge between them, from which their marriage never recovered.

Upon entering the exhibition, I was immediately drawn to "American Infamy #5," strongly reminding me of the Edo period Ukiyo-e school screen paintings, which are aerial views with golden clouds separating famous battle scenes, horse riding competitions, or domestic activities. In this large screen, however, Mr. Shimomura has us behind three guards, looking down through black clouds to tarpaper shacks on brown earth surrounded by barbed wire, populated by people ranging from those who are trying to make the best of it to those in despair.

There is an overwhelming sense of boredom and life in suspension in his grandmother's diary entries, which also pervades these paintings. For example, in "The Lineup," men are in perpetual waiting to use the camp's public facilities.

Stylistically these works reflect the flat two-dimensional planes of color, pattern, and outline of classic Japanese wood block prints and silk paintings, such as his "Rehearsal" and the strangely poetic "Desert Garden." But in such works as "Night Watch #8," there is something of American comic book and poster art as well.

It is said that, "the boy is father of the man," and in "Enemy Alien #2" the adult artist, on the inside of an internment shack is looking out the window, where there is a cast shadow of the artist as a boy, playing.

In "Enemies #4," a young Nisei woman, in a hairdo and lipstick, like any other American girl of the period, coquettishly looks over her shoulder, where a glimpse of barbed wire can be seen. In the disturbing "Classmates #1," a Caucasian girl and her Nisei counterpart, similarly clad, gleefully munch on apples, seemingly oblivious to the barbed wire separating them.

This show is a caution, as once again there is a perceived threat from different looking Americans from alien cultures living among us. It is that, "those who forget the past are doomed, in one way or another, to repeat it." This show merits attention. And it is one that my mother would want you to see.