?I really like your reviews,? Ron Bayuzick said to me around Christmas time. ?They?re well written, fair, and you seem to know what you?re talking about.? Before I could start blushing, shuffling my feet, and mutter a ?thank you,? he added, ?I have a show coming up in August, and if there is going to be a review, I want you to write it.? 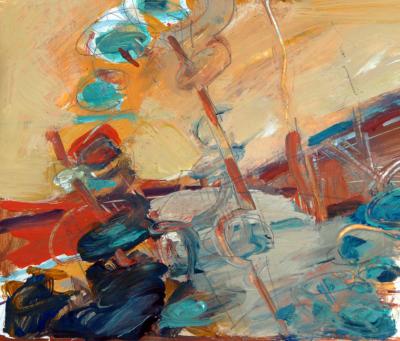 "I really like your reviews," Ron Bayuzick said to me around Christmas time. "They're well written, fair, and you seem to know what you're talking about."
Before I could start blushing, shuffling my feet, and mutter a "thank you," he added, "I have a show coming up in August, and if there is going to be a review, I want you to write it."

It isn't often that one gets such praise; after all, as Cory Vaillancourt says, "You aren't a real Reader writer until you have gotten at least one death threat. Then you get your union card." And planning reviews around exhibition schedules and the Reader's biweekly schedule is often a challenge, but with over six months to work things out and an artist clearly wanting to be cooperative—nicer than having to hide in the bushes and jump out at the artist with Reader in hand—there should be minimal trouble in getting it all arranged, or so I thought.

"But I have to warn you," I told Ron, "I can't promise that it's going to be a positive review. I never know what you are going to be doing next, and without having seen it, I can't predict what I'm going to say."

"That's okay," he stated. "Write what you want; I expect you to be honest."

While admiring his bravery, somewhere in the back of my psyche there was the hysterical laughter of a maniacal cartoon villain, tying his victim to the railroad tracks. But that was short lived because every artist deserves a fair and considered review, most especially someone who seeks you out to do it. Besides, Ron is the creator of perhaps my favorite sculpture in Erie, "When All the Clichés Add Up, Fleeing by Motor Home is Not an Option." It won awards at its debut at the Erie Art Museum Spring Show and is now on display in the Frenzel gallery of the Erie Art Museum.

After rounds of email and phone tag, Ron invited me to his home/studio to see his new work before it went to the gallery. Not the same as seeing it in the warmth of the Stonewall Gallery, but there was that whole Reader deadline versus show dates thing, and this was the best he and I could work out.

Going to an artist's native habitat is often an enjoyable experience, as this proved to be. "This is one of my influences," he said, taking me to his garden. "There are islands of flowers, which my brother calls my 'Monet relapse.' But I love to garden, and I think it shows in my work."

The pieces in this show, roughly 50 in number, fit into four categories. About 15 "tinscapes" are 2D landscapes created from painted (and rusted) metal. "Normal people like these," he explained. "By 'normal,' I mean non-artists. They find them more accessible than a lot of my other work." Of these, my favorite was "Blue Sunset," turquoise trees running diagonally across a goldenrod orange background. This, as a matter of fact, is a color combination that recurs in his work.

There are about 12 large-scale acrylic and pencil paintings on paper. These are abstractions derived from landscapes. One of my favorites—then untitled—uses the watercolor technique of "saving the whites" rather than painting in white, and with a combination of little circles and colored squiggles that almost miraculously transformed it into an airy painting of a stream with vegetation growing along the bank. Some have a discernable geometric shape, a triangle or a rectangle—"they give me control, and stop things from jumping all over the place," Ron explained.

Pointing to one, he stated, "See, that rectangle is an abandoned swimming pool—do you see the reflection in the water?" I do. Throughout are the distinctly Bayuzick color combinations, turquoise and goldenrod, burgundy and black. When Ron notices me looking at one I found disturbing for what seemed excessive use of black, he commented, "That one is about an oil spill." Job done and point taken.

"I got to the point where these got to be too jittery for me, so I went on to the [15] small pieces." He went on to explain that he was going for simplicity and spontaneity. Perhaps my favorite started with cerulean blue from another project, which happened to splash on a piece of paper. He then incorporated orange circles and minimal lines for a very complete yet simple composition. There are a couple that spring from a Mickey Mouse reference, if you look closely. And one that he refers to as "cliché," by which he means that it is clearly a landscape reference, as apposed to others which suggest it, but which the viewer could also ignore in favor of just a composition of line, shape and color.

Lastly there are a few standing sculptures from reconstituted found objects. One, "Congo," is derived from African mask motifs, but has his signature turquoise-goldenrod-burgundy-black combinations with a few other color accents.

So whether you like spontaneous splashes of color, pieces more recognizable as landscapes, or scraps of metal morphed into a standing sculpture, there is a lot here that deserves attention.

This exhibition runs from August 25 to September 22, at the Stonewall Gallery, which is in Campbell's Pottery Store, 25579 Plank Road, Cambridge Springs, and is open 10 a.m. to 5 p.m. daily. Opening reception is August 25 from 1 to 3 p.m.