Relocating to Erie, one of the first shows that I saw was Panorama, in the corridor of Villa Maria Academy, then a comparatively small and prestigious show located with the rest of the Erie Summer Festival of the Arts. 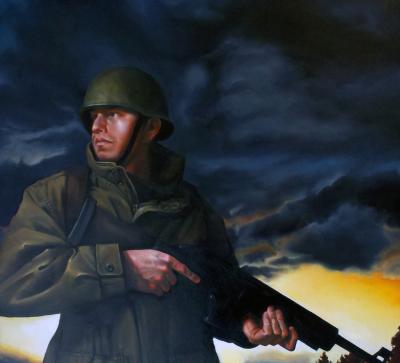 Relocating to Erie, one of the first shows that I saw was Panorama, in the corridor of Villa Maria Academy, then a comparatively small and prestigious show located with the rest of the Erie Summer Festival of the Arts. At the time, it was often called "the second chance show" because artists rejected from The Erie Art Museum's Spring Show often re-submitted the same pieces to Panorama, then considered only slightly less important.

The next year, taking the only two paintings under glass I brought from Minneapolis—a landscape and a figure study—I submitted them. The figure study was accepted by the juror, and though purely innocent, caused something of a stir. Perhaps coincidently, the next year a censorship clause appeared in the prospectus, politely stating in essence that the then Panorama Committee, not trusting the juror's judgment to reject work they detested, reserved the right to withhold from the juror any work, for any reason, without the decency of an explanation. While earmarking a piece for exclusion, they happily accepted the artist's fee payment. Also engaging in the conflict of interest, the committee members both submitted their own work and competed for awards. This began a descent into an ignominious period that the current administration is still fighting to live down.

Entering a piece the committee considered "too weird" was enough to keep it from being seen by the juror (there are witnesses), thus nullifying the jury process. I had a tiff with the then committee's chair, and, perhaps coincidently, did not get into a show again until she left the committee—and town—and I have been a regular ever since.

Then the committee started to edit the show after the juror's decision (there are witnesses) nullifying the jury again. The year the show moved from Villa to the Nautical Museum, the juror created a show the committee deemed too restrictive so they called rejected artists asking if they wanted their work included in the show (again witnesses, and I saw some of the reject tags on hanging work myself), nullifying the jury yet again.

Briefly, when the show was run by some members of the Northwestern Pennsylvania Artists Association, the a move began to restore Panorama's professional quality status, and the censorship clause disappeared, only to reappear later under another administration as: "The Panorama Exhibit Committee reserves the right of entry rejection without comment of any works judged not to be in keeping with the family-oriented nature of the Summer Festival of the Arts." As Mark Twain once said: "Censorship is like taking away a man's steak because a baby can't chew it."

The jurors were often local people. An acquaintance told me that when he had been asked to jury the show he said no because knowing all the artists, he was afraid that it would become a "friends of the juror show," to which the then committee chair responded, "But don't you think that's what all our jurors do?"

To their credit, the current administration has worked hard to resurrect the professionalism of the show and repair its damaged reputation. One of the first things done was to make committee members ineligible for awards, removing their conflict of interest. This year another good step was to obtain an outside juror, Robert Raczka, noted artist and art critic.

However, the dreaded censorship clause remains—though in fairness, they allow much that would have been ejected by earlier committees. So I'm borrowing the soapbox from Jay Stevens to say that it is time for the clause to go. There is nothing more family-oriented than an art museum like the one I used to go with my mother where I would see Rodin's "Age of Bronze," Thorvaldsen's "Ganymede and the Eagle," and Maillol's "Three Graces," all unlikely to be seen by a Panorama juror. For the past 15 years, Pittsburgh has had the Art All Night Shows, boasting "No Fees, No Jury, No Censorship" while also having children's activities. The Schuster Gallery, which is hosting Panorama, is unlikely to object to any juror's choice, being a professional venue. And common decency dictates publishing in the prospectus what is deemed undesirable, and certainly the artist is owed an explanation if excluded for reasons other than juror's decision. Refusing comment is both cowardly and unhelpful to the artist. It's time to get rid of the clause, and I am calling on the Panorama Committee to do so.

So, Mr. Raczka, the juror, has made his decisions, saying that he has set aside his personal biases to see if the artist succeeded in meeting his or her goals. Certainly a good approach. S. Vincent Palermo, director of the Erie Summer Festival of the Arts, says "This may be the best Panorama ever." Regardless of the esteem I hold for Mr. Palermo, I'm going to take issue with him here, and say that intentions aside, Mr. Raczka set the bar pretty low. There are few things of note here, and I can mention only a few of those few.

Vitus J. Kiser is being honored with a Lifetime Achievement Award and is represented by a winter landscape. Winter is his favorite time of the year, and it shows in this piece. Doing such a watercolor is difficult because you need to plan what will remain white and "save the whites" (let the paper show through) rather than paint it in.

Jesse Wolfgang, who is currently taking the Erie art scene by storm, made it into the Spring Show on his first try, and then not only repeated this with Panorama, but took the Best of Show Award for his very first drawing. His entry choices were limited because of a burglar who stole 60 to 70 of his works. His hallmarks are huge amounts of detail and contrast.

Justin Poole, is represented by "Ordo Seclorum" a brooding image of a soldier, which he describes as "a meditation on the human condition, how we come into the world and are taught to kill each other." A positive meditation on death is the uniquely and unmistakably Carol Werder self-portrait, "Numbered Days."

Among the strongest 2D pieces is Nathan McCarthy's charcoal "Of Lies," a strikingly confrontational androgynous face.

For the most part Panorama 2012 is unremarkable, though certainly pleasant enough for a gallery visit.

This exhibit continues at Gannon's Schuster Gallery, located on the third floor of the Nash Library, 619 Sassafras St., through July 21. Hours of operation: 8 a.m. to 7 p.m. Monday through Thursday, 8 a.m. to 4:30 p.m. Friday, and 4 to 9 p.m. Sunday. The gallery is closed Saturdays.