A year in reviews - the last word on 2012 from Visual Experiences. 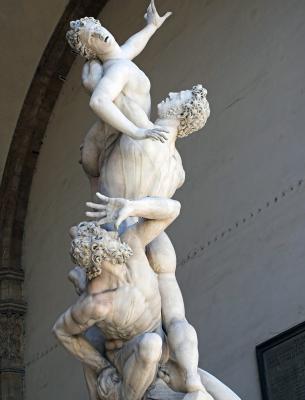 A friend of mine at the Erie Art Museum last summer told me that he detected a theme developing in this year's reviews. What he was referring to was that the issue of censorship kept coming up. What I find interesting is that when I moved here to Erie, this was not an issue, as it still isn't in most places I know of. Then a select few self-appointed arbitrators of good taste began to hijack shows and convince Erie-area gallery owners that they needed to be more restrictive than the Victorian Era. Most hide behind some vague notion of family values, and worse, some are so cowardly as to exclude a work without comment. What is rare is one, such as the LECOM show this year, who were honest enough to admit it in their contract.

As I was composing my article on "The Art of Healing," my friend Barsanuphius ("Snoofy" for short) – not his real name – chanced upon me. Explaining what I was doing, he proceeded to peruse through the LECOM Artist's contract to see what I was talking about.

"Okay, I'm on point No. 3; 'Submitted work must be in good taste and not include nudes or depict vulgar material that may be considered offensive,'" Snoofy read aloud. Looking up, he continued, "You mean to tell me that The Venus de Milo couldn't be in this show?"

"Nor Michelangelo's 'David,' nor Botticelli's 'Birth of Venus,' nor Picasso's 'Two Brothers' according to that," I responded. "And it has to fit into some vague unstated guideline of what is in 'good taste' not 'vulgar or offensive.'"

"But in a legal contract dispute, doesn't the judge find for the contract signer rather than the author in the case of vague and ambiguous language?" Snoofy asked.

"Well, there is that," I conceded. "But there is also Justice Potter Stewart's famous line from 1968; 'I don't know what pornography is, but I know it when I see it.' The problem is that everyone's toleration level is different."

"I guess, but for the sake of argument, isn't 'vulgar' pretty self-explanatory?"

"Is it? My Fundamentalist mother, who married into a family with alcohol problems, would have found Gustav Henry Mosler's painting, 'Sans Souci,' a realist's portrayal of a derelict nursing a glass of whisky, common, vulgar, offensive, and in poor taste. And yet during the time when the Erie Art Club sold subscriptions to obtain works for the Library Collection, the people of Erie thought it sufficiently desirable to keep it in Erie. And there it is, across from the Blasco Memorial Library's returns desk, in front of God and everybody. But it doesn't end there. Go on to No. 4 – the bit about originality."

"'…the Artwork does not, in whole or in part, infringe any copyright, violate any right to privacy or other personal or property right whatsoever,'" Snoofy read. "Well, that seems clear."

"Too clear," I responded. "If you went down the street, and saw a delightful scene of children playing in the neighbor's yard, brilliantly photographed it and wanted to enter it into this show, you better be sure that you had releases signed by all parents and guardians of each child in the photo."

"Weeeeeell, okay, but that seems a little extreme."

"And to be on the safe side, you better get written permission of the property owner on whose land the scene took place, because otherwise it could be alleged that you infringed upon their privacy and their personal property rights. I had a painting in the Erie Art Museum Spring Show a few years ago, which featured some toys – a couple of vintage Barbies and a plush monkey."

"And the problem with that is…?" inquired Snoofy.

"There wasn't, because the Art Museum, knowing art history, knows that artists are always incorporating objects into their still lifes from the world around them, and that this would also fall under fair use laws."

"So what is the problem?"

"The problem is," I began, "that the designs of those objects, even if I owned each toy, have designs that are copyrighted by the toy companies, which I don't have the rights to. I have a friend who does work based on ancient Egyptian paintings, which though under common usage, would fall under copyright infringement if he used a photo from a published book as reference. LECOM could exclude it based on that contract. 'Adam and Eve in Paradise' by Rubens is based directly on the same theme by Raimondi, more 'whole' than 'in part,' and Raimondi likewise based his 'Expulsion from Paradise' directly on Michelangelo. It's a time-honored practice. This also leaves out collage and digital collage, which generally use photographs of others cobbled together to create a new work. There really isn't anything new – you might base a painting on the color theory of one artist or the brushwork of another, and that could be excluded by this contract. But wait, it gets better."

"I shudder with anticipation," said Snoofy.

"This show is about the healing properties of art. I once did a painting titled 'Rape Survivor,' which was about a rape victim who transitioned from victim to survivor. It got into the Hoyt Mid Atlantic Juried Exhibition, where it sold. The buyer contacted me to talk to me about the piece and ended up by saying that the buyer was a rape victim who now realized the need of transitioning to survivor by seeking professional help."

"I guess you can't get much more 'healing' than that!"

"Yes, but it would never have been allowed by LECOM – first because the model, who was honored to be part of the project by the way, was nude to show vulnerability. Then, too, the painting was about the aftermath of rape, which probably would be considered a 'scandalous subject matter' and not in 'good taste.'  Then in the background, there were photos of the 'alleged' rapist, which could be considered 'libelous,' and add to that that I didn't photograph the assailant myself and did not hold the copyrights, for good measure."

"Okay," conceded Snoofy. "But what is the likelihood that rape would come up as a theme in art?"

"Ever hear of 'The Rape of the Sabine Women?'"

"And by Poussin, Schonfield, de Cortona, and sculpted by Giambologna. And then there is 'Lucretia,' which was painted by Rembrandt."

"If it's a Rembrandt, I'm guessing it must be good."

"Well, the one at the Minneapolis Institute of Arts is considered one of his top ten paintings. It is a story about a rape, but for this contract, it also has the added problem of being about a suicide."

"So were there others who also portrayed this Lucretia?"

"Botticelli, Titian, and Mazzanti for starters. The Titian, as well as Bertrand's and Campeny's sculpture also have the added disadvantage of exposed anatomy."

"So I guess that that just leaves us entering the show with a dull picture of a bowl of daisies," suggested Snoofy.

"As long as you made the bowl yourself. And just to be sure, you better have photos of you picking the flowers and signed affidavits of witnesses seeing you do it."

"When legal push comes to litigated shove, when have lawyers ever not gone to extremes?" I asked. "And when have a team of lawyers not ruined things? Take for example that in this contract every benefit goes to LECOM, not the artist, including no admission of liability for negligence on the part of LECOM staff.

"Look, Erie doesn't need to come into the twenty-first century," I concluded. "The sixteenth would be good enough."