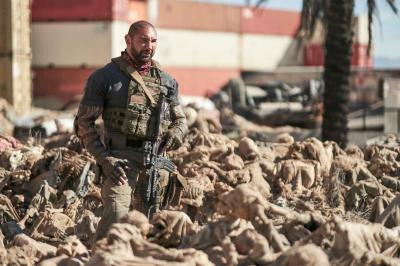 The term "style over substance" often creates a false dichotomy in filmmaking — it makes it seem like there can be either one or the other. But in many cases, the style is the substance. Zack Snyder is an example of such a filmmaker and after spending the last several years trying to reinvent superhero stories as some kind of modern Greek tragedy, he is now going back to his roots. Army of the Dead promises all the ultra-violent, hyper-kinetic mayhem of his 2004 Dawn of the Dead remake (still his best film), but whether or not it delivers on that promise is another matter entirely.

After a military accident renders Las Vegas a zombie-infested wasteland, the city has been cut off from the rest of the country. However, mercenary Scott Ward (Dave Bautista) has been called up by a billionaire tycoon to assemble a team for a job. Their mission: recover hundreds of millions of dollars from a casino before Vegas is nuked. But will they be able to make it past a literal army of flesh-eating ghouls?

After an energetic opening sequence and a fun sequence of assembling the team, the film settles into familiar territory and that momentum begins to slow over the needlessly long runtime. The story gets bogged down in multiple subplots that often don't really go anywhere and the action is obscured by the murky, blurry cinematography (Snyder worked as his own DP and he never learned to focus his camera apparently). The film doesn't have enough fun with its enticing premise and the story isn't compelling enough to hold interest, making both the style and the substance underwhelming. — Forest Taylor

by Forest Taylor12 hours ago