A celebration of suffrage at the Watson-Curtze mansion 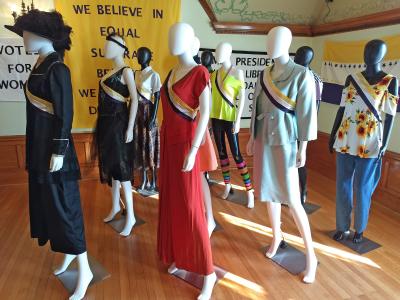 Bryan Toy
The Women's Suffrage exhibit at the Watson-Curtze Mansion features this display of ten mannequins, each one representing a decade since the 19th Amendment's passage in 1920 and dressed accordingly to their time. The exhibit will be up through next August, the official centennial of the landmark legislation.

Thanks in part to the brave efforts of local women, on August 18th, 1920, the enfranchisement of women became the law of the land. The ratification of the 19th Amendment to the Constitution of the United States marked the greatest expansion of democracy ever to have been seen in a single day.

Seven years earlier, in conjunction with the Perry Centennial celebration, the first parade in Pennsylvania supporting women's suffrage was held in Erie. Met with cries of "go back to washing your dishes" from some as they traveled toward Perry Square, hundreds of women pulled a float featuring a reproduction of the Liberty Bell and held silk banners with the words "votes for women" and "taxation without representation is tyranny." Despite their efforts, male voters in Pennsylvania rejected an amendment to the state's constitution in 1915. World War One became the turning point in attitudes, as women filled jobs vacated by men who had gone to war, proving to naysayers that women deserved as much voice in government as men. Proposed in 1878, the Amendment had taken a hard fight of 42 years to pass.

The League of Women Voters has been tirelessly working ever since to ensure that their hard-won right is exercised to its greatest efficacy. This year they have been sponsoring events in conjunction with the Thomas B. Hagen History Center celebrating women's suffrage, leading up to the centennial celebration on August 18, 2020. Be prepared for a big soiree and parade downtown on that day, as well as the unveiling of Erie's newest mural, memorializing local women's contributions to our democracy.

On the second floor of the beautiful Watson-Curtze mansion on Millionaire's Row is a simple yet poignant memorial to women's enfranchisement. Backlit with sunlight streaming through the leaded glass windows are ten mannequins bedecked with the purple, white, and gold sashes of the suffragette movement, each wearing an outfit from a decade of women's struggle since the 19th Amendment was ratified. Surrounding the room are faithful reproductions of the banners carried in that historic march in 1915. The banners were created by curator Becky Weiser and her team of college history interns. In the corner is a portrait of Helen Schurlaff, who broke ground by being the first woman to be elected county commissioner in Pennsylvania.

While exploring the Victorian mansion, make sure you wander into the next room to peruse the paintings of Eugene Iverd, one of the masters of illustration's golden age. Erie's History Center houses the largest collection of his original work. His magazine covers depicting the innocence of childhood are outstanding. Downstairs you will find a surprisingly fascinating assortment of Griswold cast iron. The variety of waffle irons alone is baffling and worth pondering over. In fact, the Hagen History Center has a huge panoply of all things Erie. In their storerooms over 15,000 objects are warehoused, so many that Weiser and her staff will likely spend several more years before they are all digitally cataloged and those with no local historical value are deaccessioned. Local people have been dropping off family records, antique furniture, historical documents, and grandma's china at the Erie County Historical Society since 1898, and the archive is a treasure trove of top hats, paintings, maps, and perhaps millions of pages diaries, letters, and public records. Much of it has limited or no information as to its provenience, making the task all the more arduous. To properly register all of it so it can be used by historians is a daunting task. If you are interested in local history, and want to feel like you are privy to secrets unexplored for decades, call the History Center. Weiser has a group of appreciated volunteers who help her. She'd love to have you on the team. You can help uncover amazing forgotten events in local history just like the 1915 march by brave women in Erie that helped assure the passage of the 19th Amendment.