Waking the Dead With the Lavery's Halloween Show 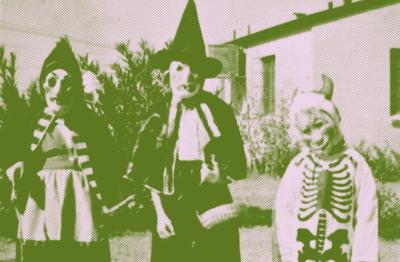 All sounds that might describe being trapped in a haunted house — and also all sounds that may describe voluntarily attending the first annual Halloween Show at Lavery Brewing Company on Saturday night (but hopefully not you recovering from a hangover on Sunday morning).

It figures something wicked would be brewing there — there always is, after all. But rarely so wicked as what is on tap for this weekend — a trio of killer local alternative rock acts in Wave Trails, Ladders, and blouses., with enough energy between them to fill a monster mash tun three times over. And seldom lauter.

Ladders, a punk rock quartet consisting of Rob Seaman (rhythm guitar/vocals), Jon Molnar (lead guitar), Erie Reader managing editor Nick Warren (bass), and Todd Cline (drums) unfolds with the straight-ahead, upfront appeal of your favorite lager. The grit and earnestness of Seaman's vocals combined with the steady rhythm section of Warren and Cline provide a nice body to the sound, while Molnar's melodic leads add crisp, quaffable overtones. Channeling the unmistakable sounds of late '90s/early '00s punk that shaped many a millennial adolescence (with the appropriate horror punk surprise or two), Ladders is worth the climb.

Post-hardcore band blouses. is more of a sonic sampler flight, as showcased on their debut EP Eat Glass. Combining the talents of Derek Hoenes (guitar), Anthony Liotta (bass), and brothers James and Dominick Quirk (drums and vocals, respectively), blouses. is at times as aggressive and in-your-face as a West Coast IPA (songs like "Cauter Eyes" and " "8:20") and at others as headily bittersweet as an imperial stout ("Paper Planes" and "Sober Closure"). Notes of slight grunginess and even surf rock detectable on the palate.

Last but not least, Wave Trails sweeps onto the stage in a psychedelic haze, as curiously complex and experimental as a Belgian ale. Beneath the dense chords and swell of effects is something undeniably enticing, with the bewitching gravity of a full moon on a fog-covered sea. Casting this captivating spell are just three men — guitarist/vocalist Cameron Fish, drummer Ben Hyman, and bassist Zack Hyman. Always a draw among local crowds, the trio is not one to ghost.

So don your spookiest attire (prizes awarded to best costumes!) and hollow out a not-so-sleepy space in your Saturday evening — Lavery's Halloween Show is sure to have your head bobbing, apples entirely optional.