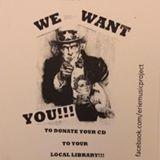 The Erie area boasts a wealth of musicians who create original music. But many venues would rather book bands who play cover songs. And it can be hard for even big name artists to sell their new music, let alone the locals. It's enough to make local recording artists feel downright unappreciated.

Enter The Erie Library Local Music Project. The brainchild of Erie Library staff members Sarah Brown-Millspaw and Jessica Makowski, the project officially launched on Facebook on Sept. 30. Local bands and musicians are encouraged to donate CDs to be entered into the Erie County Public Library system.

When I asked Brown-Millspaw and Makowski how the idea for the project came about, they said they had actually both been thinking about it at the same time. "It was a no-brainer," Makowski responded. "I go to the Kings Rook Club pretty much every weekend, and a lot of the bands are local. We have some local CDs [at the library] already, which we'll add to this collection, but I wondered, 'why aren't we collecting anything new?'"

Though the library is only able to collect music in CD form, the project isn't limited to current bands. "We're hoping to have a community archive," said Brown-Millspaw, "including from people who had bands years ago."

"I think of it, too, as a way for the library to get involved in the community and highlight what's going on," added Makowski. "Local music is a major part of Erie culture. It's really thriving around here."

Both Brown-Millspaw and Makowski emphasized the fact that Erie has much to offer artistically, but could use a little confidence.

"We really want Erie to have more of a tight-knit, community feel," said Brown-Millspaw. "Sometime last year I made this Facebook page called 'Raising Erie's Self Esteem!,' and that's kind of my goal: to raise Erie's self esteem. If we can celebrate the artists in this community — and there are so many great artists here! — if they had a place where they were appreciated, and everyone could have access to their work, they could check out a CD and think, 'oh, I'm going to go see these people play live.'"

"Maybe if somebody comes in and checks out a CD and likes it, they'll be more likely to go out, and then they're supporting local businesses, too," added Makowski. "It feels like it could be a full circle kind of a thing."

Right now, they're focused on getting the word out to local musicians and building the collection. But future possibilities include performances or open mic nights in Blasco's exquisite Hirt Auditorium, and connecting local musicians to the resources they need to record their music. "We're hoping to eventually explore all of these options and see what we can offer," said Makowski. "Who would think the library would have anything to do with having your music made? We don't have everything, but we offer a lot that people have no idea about."

Like fishing poles and tackle boxes, for instance. See for yourself.

The Local Music Project has the potential to help people rethink what the library is for. And so far, local musicians have been enthusiastically participating and spreading the word.

The Local Music Project — like many in the works within the Erie Library system — has the potential to help people rethink what the library is for. And so far, local musicians have been enthusiastically participating and spreading the word.

Musicians may drop off their CDs (in bags to protect cases) at any Erie Library branch with a note specifying "Blasco Library, ATTN: Sarah and Jessica."

Feel free to message The Erie Library Local Music Project via Facebook with any questions. You're also welcome to stop by and see them. They work at Blasco full time. "If anyone can't get their CDs to us," they said, "just let us know — we'll figure it out!"

And Mr. Monahan? They're willing to label Train "local," too.