The Definitive Chicken Wing Ratings vs. The Best of Erie voters 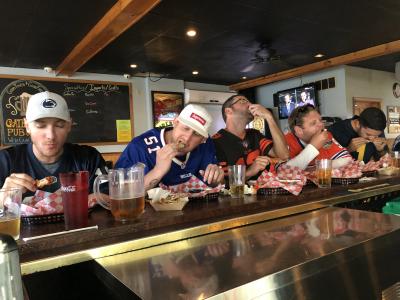 The best chicken wings may or may not be hotly sauced, but they will always be hotly debated. And one group of self-described "wing connoisseurs" have a bone to pick with our most recent Best of Erie list.

Or should we say past seven Best of Erie lists. Since the Erie Reader started collecting votes in 2014, a natural pecking order to the "Best Wings" category has emerged. From the beginning, Odis 12 Bar & Grille has ruled the roost — no doubt thanks to its host of inventive flavors and spacious sports bar setting. Although there have been no shortage of worthy challengers, the runners up, too, have proven fairly unflappable — the One Way Inn and the Park Tavern usually round out the top three (John's Wildwood Pizzeria supplanted Park Tavern last year).

"I think the Best of Erie list is more of a popularity contest than the actual best," contends Max Maas, vice president of Small Business Alternatives in Erie. Feeling cooped up during the pandemic winter, Maas and friends Mike Rouse, Joey Jelinek, Billy D'Andrea, and Pat LaFuria set out to compile "Erie's Definitive Chicken Wing Ratings." Setting private clubs to the side, "we literally tried to name as many places as we could come up with that are known for their wings."

Their ambitious tasting itinerary included a staggering 47 local establishments — since January, they've made it through 30 of them. So although they didn't completely clear their plate, there has been more than enough to chew on. To sample every sauce selection in each establishment's poultry portfolio would've been overwhelming — and quite expensive, given that chicken wing prices have tripled in the past year due to rising demand and record shortages. Therefore, when ordering, the group simply asked for that restaurant's "signature flavor" or what they'd serve at a wing competition.

Using a weighted grading scale, wings were judged on appearance, size, originality/creativity, and dipping condiment (ranch or bleu cheese). Taste and size factor more heavily into the composite score, while criteria like creativity/originality matter less. Maas concedes that subjectivity and personal preference are always at play in exercises of this nature, but counters that his judging panel solidly reflects the wing-loving spectrum from drums to flats, mild to hot, and dry to sloppy.

The Brotherhood of St. Joseph's — Titters #1

Here were the top five results for "Best Wings" in the 2020 Best of Erie voting (note that we have no category for specific wing flavors — yet!):

Best of Erie voters and the compilers of the Definitive Chicken Wing Ratings could not be further apart at the top. The panel ranked the Odis 12 Original Sauce wings 26th out of 30 in their ratings list. Maas noted the Odis 12 Original was not necessarily a bad wing (7.07 out of 10 composite score), but the iconic spot could have chosen a much more exciting flavor from their extensive roster.

Maas and his buddies were not impressed at all with the size or appearance of John's Honey Mustard wings, although they rated the flavor decent (5.34 out of 10). Overall, these finished dead last among the reviewers. While Maas admitted they may have gotten "a bad batch," he suspects John's excellent pizza and close association with a buzzing brewpub (Erie Brewing Co. Knowledge Park) boosted their standing among Best of Erie voters.

The gang never got around to trying the One Way Inn, a perennial favorite among Best of Erie voters (you can never go wrong with the 24K, hot + honey mustard blend)

The Plymouth Tavern's Sweet and Spicy wing finished middle-of-the-pack (17th out of 30) in the panel's ratings list, scoring above an 8.00 in appearance, taste, and dipping condiment categories.

Although we're talking chicken wings, this is where we have beef. The Park Tavern Herbie Cajun wing (a spicy BBQ sauce infused with Cajun spices) — named one of the Erie Reader's 11 Can't Miss Dishes this past March and one of my personal favorites — was ranked a shocking 20th out of 30 according to Maas and company.

Everythings came together at the top — the Fiddle Inn's flagship wing (tossed in a secret blend of sauces and studded with chopped garlic) ranked first among all contenders in taste (9.40 out of 10) and size (9.20) and third in originality (9.12) for a composite score of 9.18. Although the Harborcreek haunt is still being underrated by Best of Erie voters in my opinion (6th place in 2020), it's at least being acknowledged.

The Brotherhood of St. Joseph's Club in North East — whose dining room is open beyond the brotherhood to the general public — finished just barely behind the Everythings with their Titters #1, rated a 9.16 out of 10 overall. St. Joe's is one of three establishments — along with the French Creek Tavern and the Beechwood Golf Course — ranked in the group's top five that weren't even Best of Erie nominees.

Maas said his group was perhaps most pleasantly surprised by the Valerio's Honey Golden Ranch flavor — they did not approach it with high expectations, but "holy shit, that sauce was amazing." Valerio's finished ninth in last year's Best of Erie vote.

Although garlic-forward signature sauces loomed hot and heavy in the Definitive Chicken Wing Ratings, sometimes a perfectly executed Buffalo wing (aka "Medium") is all you need. The French Creek Tavern in Findley Lake, N.Y. has one of the region's best.

What is your favorite wing in Erie, PA? Make your voice heard— Best of Erie nominations are open now.

Matt Swanseger (mswanseger@eriereader.com) is just a wet nap away from answering your emails.