Wasted Info // Tacos, Paint Fumes, and All the Other Essentials 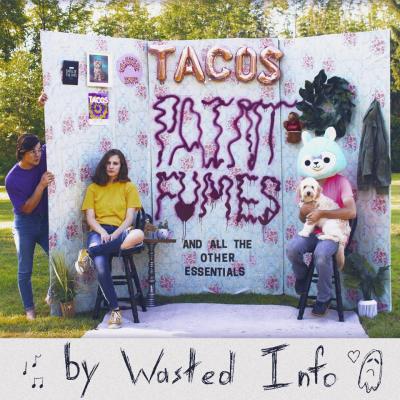 There's something warm and immediate about Wasted Info's debut album. That kind of distinctive touch probably isn't an accident from the Erie band. In fact, it makes perfect sense — they recorded all ten tracks themselves. Spinning Tacos, Paint Fumes, and All the Other Essentials is pure lo-fi fun. From the start of the band's eponymous and extremely catchy opening track, you get an idea of what's in store, with a healthy share of curveballs thrown in. At the heart of the band is singer-guitarist Kennedy Krahe, joined by bassist Garret Mallory. There are times — particularly in the uptempo tracks three through six — where Krahe belts out her vocals with an exuberance that echoes Marissa Paternoster of Screaming Females, mixed with the humor and approachability of Colleen Green or Tacocat. Then there are others (like "I Sometime") that are pure Kimya Dawson, as the latter half of the record dips into a more somber tone. Any comparisons aside, Krahe, who founded Wasted Info in 2015, knows who she is. Essentials shows off that infectious personality, both as a loose bedroom album and a document bursting with potential that's certainly not wasted. — Nick Warren