It isn't easy being green. Or maybe it is. 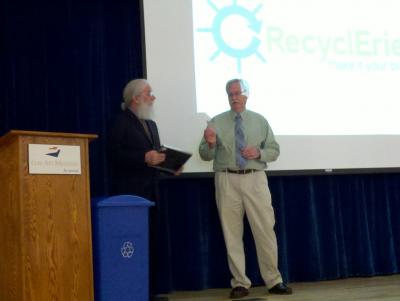 "These are symbols that tell us what our responsibility is," Erie County Executive Barry Grossman said, pointing to blue recycling cans on the stage of the auditorium at the Erie Art Museum. "This issue," Grossman added, "is close to my heart, having worked so long in the restaurant industry."

The issue that Grossman referred to is RecyclErie, a joint venture between Erie County Recycling Program and Environment Erie that is an incentive-based program designed to assist Erie County bars and restaurants in developing and/or expanding recycling in their establishments.

innott added that with the success Erie's seen with the single-stream recycling method currently employed, this is the next logical step in Erie's greener footprint.

Don Blakesley, Erie County Recyling Coordinator, gave one big reason for the necessity of this program: "68 percent of what bars and restaurants throw out is actually recyclable." He followed that with statistics from a national survey that found that 60 percent of bar and restaurant patrons would deliberately frequent recycling restaurants more often, and 51 percent would be willing to pay more if a location were participating in a recycling program.

While RecyclErie first launched Feb. 1, Blakesley was quick to note that this project isn't a one-and-done initiative. "This," he said, "is going to take time."

Another incentive for joining the program would be the special waste and recycling rates offered by Waste Management. Additionally, the reduction of waste being picked up with the increase of recyclables being picked up will lead to far less materials headed straight to a landfill to begin a 4,000-year-long process of decomposition--something we can all feel better about.

"Success depends on the owners and managers, but it also depends on the consumers," she added. "Patronize businesses that align with your environmental beliefs."

RecyclErie is currently contacting Erie City businesses, but plans to expand to Millcreek, Summit, and Fairview townships are underway. Both Blakesley and James said that if a local business is not yet part of the program, encourage your favorite establishment to join RecyclErie in an effort to make Erie a deeper shade of green.