We All Float On...: It Chapter Two is Overlong and Underwhelming 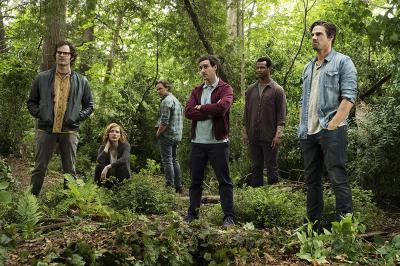 Stephen King's gargantuan novel It is half a great novel: the half dealing with children overcoming their fears in the form of an ancient evil disguised as a clown. The parts involving the same characters as adults are much less compelling, so the second film adaptation of King's novel already had an uphill battle in making this story gripping. Sadly, like the novel, It Chapter Two is punishingly long and ultimately anti-climactic. Also, the film version makes the added mistake of turning the whole thing into some kind of comedy.

It's been 27 years since the Losers' Club defeated Pennywise the Dancing Clown (Bill Skarsgard) and they have since gone their separate ways. However, when children in Derry, Maine start mysteriously disappearing again, our heroes find themselves drawn back to their hometown to put an end to this evil once and for all.

The film is well-shot and powerfully acted and there are occasional terrifying sequences (including one tense scene involving a house of mirrors), but the director frequently undercuts the suspense with near-constant humor. Scenes that should be unbearably scary or emotional are suddenly interrupted with jokes or cartoonish CGI, making the whole experience more funny than scary. The source material already falters towards the end (something the film seems to acknowledge), but did the director need to make it even worse by turning every other line of dialogue into a joke? It Chapter Two tries to be a new horror epic, but the constant shifts in tone make it feel more like a later Nightmare on Elm Street sequel. — Forest Taylor