We Are The Best! reviewed

An hilarious, potent, and lighthearted look at the half-digested ideals and struggle for identity that is so universal in young life. 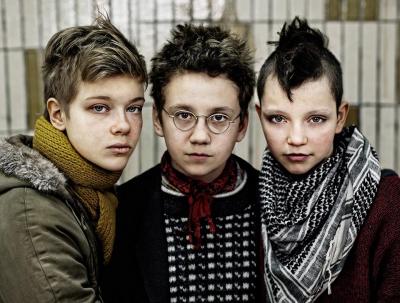 It's a no-brainer to say that over the years, cinema has reflected the adolescent experience in a wide spectrum of ways -- from the depressive reflection of The Perks of Being a Wallflower to the clever comedy of Ferris Bueller's Day Off.

We Are the Best!, the latest from Swedish director Lukas Moodysson, falls somewhere near the latter category. Moodysson's adaptation of his wife's, Coco Moodysson, graphic novel is an hilarious, potent, and lighthearted look at the half-digested ideals and struggle for identity that is so universal in young life.

Well -- that and punk rock. It's a wicked combo.

Set in 1982 Stockholm, Moodysson's film follows Bobo (Mira Barkhammar) and Klara (Mira Grosin), two thirteen year old girls with a love for punk rock (even though they're constantly told it's dead) and a disdain for anything ordinary (just about anything that isn't punk). It's in gym class that they write their first song, "Hate the Sport," a punk-rock basher about the close-mindedness and their perceived meaninglessness of sporting events when the rest of the world is in turmoil.

With this and a ridiculous sense of punk elitism to carry them, they start their own "band," despite their lack of instruments or any musical training. Hopelessly inept, they turn to Hedvig  (Liv LeMoyne), a classically-trained guitarist and Christian good girl who can bring their ambition to life. Klara and Bobo aren't fans of her beliefs or her musical training, but feel they can free her from Christianity and turn her punk in one fell swoop -- all for the good of the band.

Moodysson is a thoughtful and sympathetic observer of both sides. He never crosses a line of judgment or scorn, even when Klara and Bobo hilariously introduce Hedvig to "Hang God," a punk song about, well, what it's title would imply. A practicing Christian, Moodysson's portrayal of polarized beliefs is a celebration of variety rather than a subtle exercise in finger pointing. Klara stubbornly insists that religion is a myth, and Hedvig maintains that not all things real are palpable. Moodysson humorously reminds that both are okay -- and neither are without flaw.

In the vein of other coming of age classics, We are the Best! is an ode to friendship that can withhold the barrage of crap that early teenage angst and drama can throw at it. More than this, though, it's special in that it unhesitantly and enthusiastically celebrates what it means to be young and aimless. It's a time when everything is a step to coming of age, and a time when everything is possible.

In a time when the collective media is too often a quagmire of romanticized misogyny and teenage malaise, Moodysson reminds that being a teenage girl isn't a curse. We are the Best! is a tribute not only to female power and independence, but a tribute to the joy and strength of tweenage wonder. Even when they're taking serious flak for their hairstyles, or having their bond tested by the ambiguity of adolescent romance, Moodysson's trio holds together and sticks to their spotty conceptions of what is true- they know they're the best, and so does Moodysson. It doesn't get any more punk than that.

We Are The Best! will be screened at FILM at the Erie Art Museum Wednesday, June 25.