We Have Met the Raindrops and They Are Ours

The 'Don't Give Up the Drip' rain barrel project goes public. 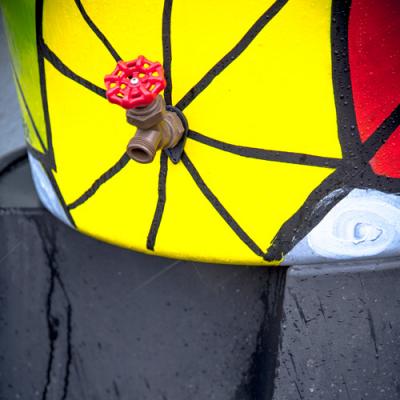 Since December, 46 Erie area artists have been toiling in studios, garages, basements, and apartments to bring their creations to life for the Don't Give Up the Drip rain barrel project hosted by EnvironmentErie and the Erie County Conservation District. Some broke out paints and brushes, others carving tools, and some even power tools. The latter is what my husband, Mike Plyler, and I did to make "Bloomin' Can-tastic."

On March 17, the artists' creations, 52 barrels in all, were unveiled at the Erie Home and Garden Expo. The crowd loved them. Kristen Currier, Environmental Educator at the ECCD, said it was great to hear the oohs and aahs of the visitors. "Everyone good-naturedly complained they couldn't choose their favorite, they were all so good," she added.

The variety was stunning. From re-creations of famous paintings to three-dimensional fish rendered in wood, metal, and plastic, the barrels on display not only provided beauty, but also brought home a water conservation message.

Making the barrels both pretty and functional was appealing to the artists in the project. Christine Salva, who made "Swirling Symphony," says she made her barrel because she "saw this as a fantastic opportunity to participate in a project supporting the arts and environment."

Making the barrels both pretty and functional was appealing to the artists in the project. Christine Salva, who made "Swirling Symphony," says she made her barrel because she "saw this as a fantastic opportunity to participate in a project supporting the arts and environment."

And Bryan Toy, maker of "Steelhead Upstream" and "Starry Night," says "Public art changes the world. The message of these rain barrels is 'conserve.' The art gets them noticed so the message can come across."

Peggy Brace's "Blue Planet People" depicts humans intermixed with the globe, sky, and ocean to get across her message, "Whatever people do in the name of progress that is harmful to our environment is harmful to all of us. I wanted to remind people we are 60-70 percent water and we need to be in harmony with our environment."

The sponsors of the project were just as eager to share an arts and environmental message. Alice DeGeorge, who sponsored Salva's "Swirling Symphony," says she just loves the idea of an art piece both functional and helpful to the environment. Plus, she says, "I love supporting local artists!"

Penn State Behrend went two steps further by sponsoring three barrels to be installed at key locations around campus. Ann Quinn, Director of Greener Behrend, says, "I got involved in the project because I am very interested in Lake Erie and storm water management. At Behrend, we have many best practices for storm water runoff in place, so this project was a perfect fit."

It was a perfect fit for the Erie County Department of Health, too. Karen Tobin, Director of Environmental Health Services, says, "I wanted to have a rain barrel at the Health Department building so that we could practice what we preach. Many of our programs involve protecting the environment and our water resources. Now we support a project involving the entire community and we can help spread the word about water usage."

Currier was gratified to hear many people at the Expo say they were happy to see this project in Erie, and how important it was to collect and reuse water. But, she says, "I was amazed that not all people were familiar with the concept of collecting rain water for future use."

She's hoping Don't Give Up the Drip will change things. So far, just the exposure at the Expo has already helped. "More than one person mentioned that they intended to do rain barrels for years," Currier says, "and this project kicked them into gear." The ECCD sold out of the unadorned rain barrels they had for sale at the show, and Nate Millet, Education Manager for EnvironmentErie, says registration numbers for the agency's rain barrel workshops saw a big uptick over the weekend.

But wait, there's more. The second phase of the project will take the barrels to the streets as they get installed by early May at sponsor and host sites across the county. "We will be teaching the sponsor sites how to care for them and use them this summer, and also working with them this fall to make sure they are properly disconnected and stored for the winter."

A map of all the locations was printed and will be available at all barrel sites, as well as online at erieconservation.com and environmenterie.org.

As the rain barrels are deployed from Fairview to North East and south to Edinboro, the potential exists to save at least 3,000 gallons of rainwater, just this season. If the project inspires others to install one of their own, the savings county-wide could be exponentially more.

"Nate and I are hoping Erie takes off with this idea and we see original rain barrels popping up all over Erie," says Currier. "It doesn't have to be fancy. Stencil your family name on it, or your house number. Find an artist friend to do an original design or have your little ones put their handprints on it. Or leave it blue like the sky and just use the free water."

Free water. To use on a sunny day when your flowers and veggies need a drink and the rain's not coming down. Now there's some artful conservation.