Erie Reader sent Michael Bennett on a quest to find good music over the course of a weekend. This intrepid reporter says participating in the shows and pariticipate is exactly what he did because he was there. 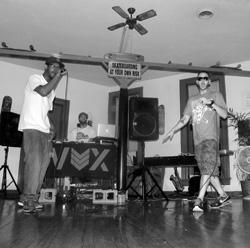 Erie Reader works ceaselessly to keep you informed of the shows and events you should put your full faith and effort into seeing, but we?d also like to present you the opportunity to kick yourself for missing a great show. Or perhaps spark your interest enough to catch a group the next time they play. Or, on occasion, commiserate with the writer about the failed journey into an abomination of a night where all you wanted was good music, but nothing was delivered. We are happy to offer you ?You Weren?t There.? But I was.

The heat was oppressive. The top floor of a classic Erie building is no place to be when the night offers no break from the heat. But the fact that I was sweating in an almost irresponsible manner did not deter the entertainment on display. Pittsburgh hip-hop artist M H The Verb made his way to Erie in support of his new album ?Cult Classic.?

The old skate shop turned into an all-ages hip-hop extravaganza for the night. Local talent of dancers and freestyle MCs were on display before another Pittsburgh act, Varsity Squad, got the small, enthusiastic, and sweat-covered crowd moving.

As M H The Verb took the floor, the beats began and a whole new movement of hip-hop emerged from the PA system. His own DJ didn?t make the gig, but Erie?s own DJ NastaK of 814 Bass Crew took to the tables with no allusions and no quarter given. The Verb?s rhymes were crisp and effortless. His beats heavy and pulsing, and the addition of his friend Arnold on saxophone made the music an experience and not just beats for words.

The MC was also gracious with his time and interested in sharing the mic with local talent, and took on all comers in miniature freestyle battles.

The crowd bounced with the beat, and, when prodded, threw their hands in the air like they just didn?t care.

?I?m gonna be really honest with you, the first thing I always think about when I?m writing songs is how I?m gonna do it live,? M H The Verb said after the show, constantly wiping the hard-earned sweat from his face. ?I?m trying to come up with a concept, a vibe for the song that will go off live. It?s all about the live. The essence. The whole vibe of the song I want to be positive about real stuff. Say what?s on your mind. Gotta make music for you. ?

Free copies of the new album were given out to everyone who attended, a gracious gesture from an artist who missed his last Erie date due to a flight cancellation. The audience was more than appreciative, and a few girls who were holding copies of the album, but refused to get up and dance when requested, were called out by the rapper: ?If you?re not gonna dance give me back my CD.?

?Right now I feel like in Erie there is a lot of good momentum going as far as bringing real-deal straight-up 100 percent hip-hop to town,? said Jason Imig of 2189, who promoted the show. ?We?re really trying to focus on the all ages aspect I feel is lacking in Erie. It will give kids an alternative to a lot of the stuff they see on MTV as far as the guns and gangs and stuff like that. When hip-hop was born it was born out of gangs and trying to stop that violence. And I feel like there is a lack of that here as far as another outlet and obviously there is a need for it.?

2189 will be presenting the Def On Arrival Tour September 18 at The crooked i.

Smackdab could make a dead man feel the groove. The Jamestown band took the short, yet intense road trip down I-90 to Erie for a killer gig Friday night.

I?d love to tell you about how great the opening act Is What It Is was, but The Reader has humped their leg enough this summer. (Deservedly so, but Trohoske doesn?t need another clipping with my by-line on it.)

Smackdab has immense energy on stage. From the opening chords, the band has an understanding of how to get the crowd on to move on their level.

?We do what we do,? vocalist and percussionist Jonny Johnson said. ?Any show we play we consider it no different than any other show. We play it to the nines all the time. Twenty people or 200 people?. any crowd that comes out to see a band should be expecting to have fun. As long as you don?t alienate the audience right away I think you do all right. We just bring it and hope everybody rides along with us.?

And ride along they did. The dance floor was full of moving bodies. It was hard to not be swept up by the music and at the very least bob your head and tap in time.

There is a definite air of ?70s funk and soul to the group, like Earth Wind and Fire. (Right Mermaid?) But that is just a block in the foundation of the group?s musical diversity.

The backbeat is funky, but the keys and guitar fly around the musical spectrum filling out each jam. The music is soaked in soul and floating precision, the kind that get the asses moving on the floor.

It?s not surprising the band has been together for 10 years. Their anniversary is this month.

It had been more than five years since the band last played Erie, but is looking to come back again soon. Especially since they are all talking about getting back into the studio soon to record a new album.

A day of madness for this intrepid music reporter.

I, along with some of my closest and dearest friends, was treated to a great performance by Eric Brewer & Friends at the wedding reception of Mr. and Mrs. Tapper. (Pronounced TAY-PER, apparently)

The group played a great set including choice covers by The Band and Phish. As well as a phantastic cover of Seth Bremmer?s ?Lasers (He?s Leaving His Wife For).?

Next stop was The Brewerie to catch the end of a great set by The Heliotropes. They are indeed a tight act. The passionate vocals entwined in delicious guitar riffs, held down by precision bass and a deft and driving drumbeat is an honest treat for any music lover. The crowd dwindled toward the end of the night, and those remaining were treated to the band becoming infatuated with the ambient possibilities of combining their talent with looping machines.

A quick walk through a ?downtown development district? and some outrageous new street corners put my ears in touch with The Pick-Up Band at The Vermont. Another great composition of veteran local talent mixing incredible vocals with expert musicianship. I?ve seen the band play so many times, but the set never feels complete until I hear their cover of Steely Dan?s ?Kid Charlemagne.? As one fellow music lover and I discussed: It is an achievement just to cover the song, let alone nail every single time.

As the magic 2 a.m. curfew drew near I jumped down the block to catch the last bit of Johnny James & The Absolutes at The crooked i. Having had the pleasure to see the group two weeks in a row, I?m still not sure how to describe the sound. I will defer to a close friend who calls it ?indie garage rock done right.? Works for me. And the crowd. The guitars smash against your skull. The beats are propulsive and true. It is a self-defining noise that grabs onto emotion and shakes it free of tumult and warps the fabric. In a great way.

Erie is filled with great music. It is imperative you participate in seeing these shows. After a three-day stretch of great music my meter was on empty. As I made my way out into the night I thought about one of my favorite Dylan lyrics: ?Alright I?ve had enough. What else can you show me??

Michael Bennett believes in SYLS. Support Your Local Scene. He can be reached at mbennett@eriereader.com