Erie Reader works ceaselessly to keep you informed of the shows and events you should put your full faith and effort into seeing, but we'd also like to present you the opportunity to kick yourself for missing a great show. Or perhaps spark your interest enough to catch a group the next time they play. Or, on occasion, commiserate with the writer about the failed journey into an abomination of a night where all you wanted was good music, but nothing was delivered. 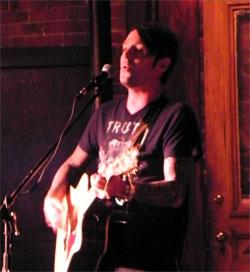 Thursday, Oct. 20
The crooked i

I'm a big fan of the off-night show. Sure, it's easy to get pumped for the pomp and circumstance of a big weekend gathering, but there is something special about being in an intimate crowd and just digging live original music.

That being said, The No Good DooGooders dropped in to The i for a Thursday-night set that lacked any real energy. Maybe it is easier for a crowd to get amped for a weeknight show than it is for a band.

The Jamestown group seemed stuck in the mud from the get go. Their songs had potential, and there were moments of jammed-out bliss, but they were few and far between. The drummer seemed to be plodding behind the band, rather than driving them onward.

Their sound could best be described as Sublime Against The Machine, but the dime store version. Some covers had heart, but their cover Stevie Wonder's "Superstitious" sounded just like a bar band of white guys trying to cover Soul genius.

I wouldn't put it past the band to be able to deliver a great show, but on this night it was not to be.

Saturday Oct. 22nd
The crooked i
The Beer Mug

Claire Stuczynski deserves bigger crowds. Her opening set for Eric Brewer and Friends was a perfect compliment to the headliner. Her music engenders a mood of optimism and togetherness. Graceful folk.

Her songs are well crafted and when she was joined on stage by Mr. Brewer's guitar and Charlie Meyer on keys her voice lifted with the accompaniment, and there was no choice but to have your spirits lifted.

In fact, there was a certain contingent of the audience who took the notion of "dance like no one is watching" to a whole new level. They made it an art form. A terribly funny art form.

I shouldn't need to tell you again how truly great the musicians that make up Eric Brewer and Friends are. After seeing them in various places over the last several weeks I have a much higher appreciation for their stagecraft.

They always deliver great sets, but they way they are able to calculate the tenor of the audience and the space they occupy is truly impressive.

They can play a blues-filled, muted set to appeal to a more easy going crowd, or throw in a choice array of covers to keep an unadorned crowd under their spell. But they shine best when they let go and play for themselves to a crowd that loves and understands music.
They are all seasoned Erie musicians and have plenty of support from friends and other local talent, so when the crowd is on their side and ready to call them out if their chops don't cut it they do nothing but excite, entice, and move the crowd to find absolute enjoyment in their sound.

I am a huge proponent of the Erie punk scene, to give it a name. And there is something to be said for the ambiance provided by The Beer Mug. I really wanted to catch the debut of Goat Corpse Defiler and the always-impressive Mala Sangre, but they had already played by the time I'd arrived. Poor planning on my part. If there are only three bands on the bill you'd better get there early. Unlike the six or seven bands bills, where everyone plays a 20 minute set and more time is spent watching the breakdown and set-up of gear than actual music.

But my disappointment in missing the first two acts was not to linger, as Slam Corps took the stage shortly after my arrival. If you don't know Slam Corps you may not know what it is like to have your skull shaken, twisted, and beaten for your own betterment. This is mad hard punk.

Are they filled with anger and aggression and in need of an outlet to come to terms with their emotions? Perhaps. But I think it has more to do with perspective a different view of the world, of the American Dream. Loud and dynamic, encompassing the things that make us all hunger for repose.

Dom DeCecco gives lazy, dirty hippies a bad name. Not only does he play with Shotgun Jubilee, Scarlet Ledbetter, and a host of other side projects that come and go, and co-host the open mic Sunday's at The crooked i, he does great service to the music scene by hosting the Songwriters Showcase Mondays at The Vermont.

Every week Dom assembles three local acts to play bare-boned versions of their original work. The atmosphere is light and inviting, perfect for a late supper or quiet appreciation over drinks. It is a great chance to see how blessed Erie is with original songwriters.

On this night, Kevin Pollifrone opened the festivities. You won't see him winning American Idol anytime soon. His voice is not a pop-sugar dream, but the focus and style of his playing does not require it. He has moved beyond a simple mix of strum and pluck guitar work to incorporate loops and a kick-drum. I will state honestly, as he is an old friend of mine: his music is not for everyone. And I think that's great because if you do dig his music, his songs will work their way into your head and your soul.

The second act was father and daughter team Glenn and Lucy Rankin. Their intertwining vocal harmonies and playing are a true delight. Lucy's voice is angelic, while still strong and assured. You can watch them feed off of their familial energy and always bring joy to the assembled crowds.

Aaron Forsyth of Letters to the Dead closed out the night. Reeling to and fro from the mic, foot stomping to keep time, belting out passionate lyrics his frontman status is unchanged when he is playing solo. The Showcase allows the performers to tinker with older material and debut new songs that have just moved from the embryonic stage. Forsyth took full advantage of the opportunity in both his songs and his banter with the crowd.

Thursday, Oct. 27
The crooked i

I'd never heard of the Plastered Bastards from Pittsburgh, but after the first two songs, I'd heard all I needed. It was akin to bad '80s grind metal infused with banality. Enough said.

The night did see the return of The Goddamn Gallows, who have built up quite a loyal local following. The crowd was amped. PBR was flying out of cans, out of mouths, out of nowhere. The floor was packed with gyrating pogo-ing madness and the energy in the room was enough to push any band to the peak of their abilities.

But it wasn't even quarter after 1 before they finished their set.

Did they give their all and leave it on stage? Nothing more to be pulled from their instruments? No. They played a cheap set. There was action, there were highpoints, but after they exited the stage the bar had an aura of dissatisfaction.

In a town full of great music fans, who turn out to see these acts, it is a sort of slap in the face to not play a longer, fuller set.

Sure, maybe they were tired—touring can do that. Maybe they didn't get the kind of reaction from the Erie crowd they were expecting. Either way, good money was offered up and desires were not fulfilled to their fullest.

It was my birthday weekend and escape was necessary. Sure I missed great shows. Is What It Is, Bill Burke Trio, Big John Bates, and Darksider. But this reporter needed a breather from the lakeside scene and the madness that surrounds it.
On a whim, literally, I toured down to Millmont, Pa. (yeah, I never heard of it either.) And in a corrugated steel building on a little family campsite I happened upon a great band and great people.

Mystery Train jammed out several sets throughout the night, each taking on a different facet than the previous incarnation. Jangly pop songs, countrified jams, drum and percussion solos, and sonic dissonance flowed from a great five-piece band. In an out of the way place full of strangers I had a brilliant birthday. I'm thinking of getting Mystery Train to make it to our neck of Penn's woods ASAP.