Remember ERTV? Yeah, that was cool.

by Cory Vaillancourt
View ProfileFacebookTwitterGoogle+RSS Feed
August 27, 2012 at 11:41 AM 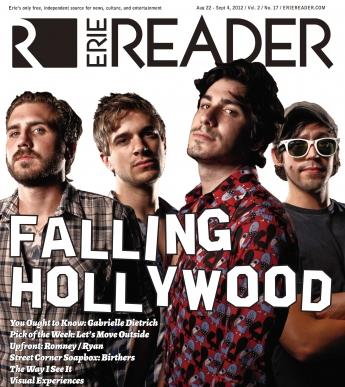 Yeah, that was cool. Ahead of its time, that's for sure. Prophetic, even. It was so ground-breakingly visionary that after the first 3 episodes aired, the Man couldn't handle it and they shut us down; that shining beacon of awesome that was ERTV – it went dark. America just wasn't ready for ERTV in the spring of 2011.

So until ERTV again becomes that shining beacon of awesome, please enjoy this archival footage rescued from the very bowels of the Erie Reader media vault, located in the very bowels of the Erie Reader Tower, located in the very bowels of downtown Erie. Shot in the summer of 2011, this footage, above almost all other footage, demonstrates why somebody from one of the major TV networks who might be handing out free shows with a large pyrotechnics budget should remember ERTV when they consider their need for prophetic ground-breakingly visionary shining beacons of awesomeness with pyrotechnics. This footage happens to be of the musical guest on our third and final show – not-so-coincidentally, this week's cover story, Falling Hollywood – performing three songs that all appear on their debut album, "Set the Table."

Their performance on ERTV that day had a very stripped-down, earthy feel to it, possibly due to the fact that you can't hear Brad's drums because he's in class at Indiana University of Pennsylvania, and not playing them in our TV studio. Additionally, if you can hear Bill's bass in these videos, I'm truly worried, because it means that I've finally lost all of my low-frequency hearing capabilities. Oh well, he looks like he's enjoying himself, at least. I bet he's good.

First up, it's "Sell you Short." Members of the band hadn't seen this clip in ages (if ever), and when I first showed it to them on my laptop – right after this issue's cover photo shoot at the brilliant Joe Cottrell's studio – they all loved it. Even though they all bitched about how it was shot at like six in the morning. It was actually around 9:20 a.m., fellas, which was just as agonizing for us as it was for you. But when ERTV comes back, we're shooting for late-night, I promise.

During filming, I remember standing off-camera with ERTV host Ben Speggen, a few interns, and some of the production crew as Falling Hollywood performed this next number. We all stood around, looking at each other, slack-jawed and speechless as they wowed everyone in the studio with "Sand Dollar Sky," which I consider their signature tune.

Falling Hollywood closed out their performance, the episode, and ERTV itself with the rollicking, "Mr. Time." I have no regrets – if we were to go out, I'm glad we went out like that, because as Matt Flowers sings in "Mr. Time," "I got hope – hope that we'll all get home." And when we all get home – when ERTV gets home and re-emerges as that prophetic, ground-breakingly visionary shining beacon of awesomeness with pyrotechnics that it once was, we'll bring Falling Hollywood back for the first episode. Or the Roots. Or whatever.

Are you ready now, America? Do you want us to bring ERTV back? Do you know any major TV networks who might be handing out free shows with a large pyrotechnics budget? If so, put in a good word, won't you, sport?

Be sure to check out the cover story on Falling Hollywood, on newsstands now; or, for the lazy, right over here. Check out @VLNCRT on Twitter, too.