The vibrant illustrator will debut a mural as well as have an opening reception back to back.

by Nick Warren
View ProfileTwitterInstagramRSS Feed
October 25, 2017 at 9:30 AM 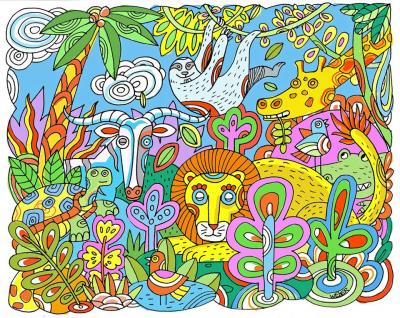 Mark Weber makes memorable art. His fanciful, buoyant, illustrative style has been well-displayed in Erie — particularly the Erie Art Museum — for years. His work has been featured on multiple posters for the Blues & Jazz Festival, most recently in 2015. In January of that year, he was also the artist in residency at the museum, crafting new, improvised creations live in front of patrons.

His newest show will feature one of his most-loved motifs: "Animals." That's the title of Weber's latest exhibit at the Erie Art Museum. Running until February 11, 2018, the show's opening celebration will be on Thursday, Oct. 26 at the Ronald E. Holstein Gallery. The artist will be on hand to create live drawings and illustrations similar to his 2015 appearance. His animal-themed drawings will be accompanied by beer pairings from the Erie Beer Company, and the Erie Zoo's "Traveling Zoo" will even bring around live animals to the event — likely subjects for live illustration.

Weber has had his work appear in numerous publications over the years such as The New York Times, The Wall Street Journal, Playboy, Rolling Stone, and The Atlantic Monthly.

The Erie expatriate — and current Wilmington, North Carolina resident — has had his work appear in numerous publications over the years such as The New York Times, The Wall Street Journal, Playboy, Rolling Stone, and The Atlantic Monthly. An active illustrator, he has provided art for over 75 young reader books for Townsend Press.

At 10 a.m., following Thursday's opening, The Big Picture Mural Project will unveil a mural by Weber in the heart of Erie. On the south-facing wall of the St. Martin's Center, at the corner of 18th and State, Weber's bright, vibrant work will be showcased for all to see.

Imbuing each creature with a humanistic life of their own, he anthropomorphizes them with exuberant style. Whether working in painterly clouds of gauche, or bold vector-like line work, each piece carries its idiosyncratic traces. While often varying wildly in terms of style from one piece to the next, each of Weber's creations has an organic, warmly cartoonish feel. — Nick Warren