Movie Review of We're All Going to the World's Fair 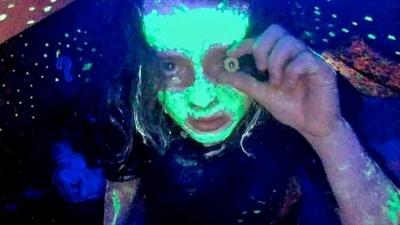 As the Internet has become more and more ubiquitous in our lives, filmmakers have attempted to capture what the online world feels like. Many of those films are now hilariously dated, but some have touched on real truths of the strange and often surreal world that online life can provide. I think that Jane Schoenbrun has gotten the closest to depicting that often lonely, occasionally creepy, but ultimately fascinating life with their new film We're All Going to the World's Fair. Schoenbrun gives us a tale of online obsession that is both detached and surprisingly intimate.

Casey (Anna Cobb) is a lonely teenage girl who decides to take part in a new online role-playing game known only as The World's Fair, which promises to alter the participants both physically and mentally in unexpected ways. As Casey documents how the game is affecting her through her vlog, one of her viewers warns her that there's more to The World's Fair than she knows. Or is it just part of the game?

The film does an excellent job of depicting the depersonalization that life online can often bring. It's telling that there isn't a single conversation that doesn't take place in front of a screen. But it never judges the protagonist, instead showing why so many are drawn to that world with effective establishing shots of urban decay and the crumbling relics of consumerism. While the Internet can become an obsession, for many isolated people it can become a place to live more truly as oneself. As a nonbinary individual, Schoenbrun understands this more than most. The film's depiction of both the good and the bad of the Internet is one of the most honest yet. We're All Going to the World's Fair is currently playing in select theaters and is available on Amazon Prime, Apple TV+, Google Play, Vudu, and YouTube. — Forest Taylor

Movie ReviewWe're All Going to the World's Fair