Women reunite to march for dignity, rights, and respect 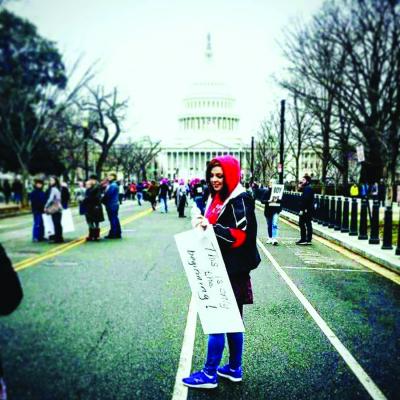 Contributed Photo
On January 21, 2017, nearly half a million people participated in the Womenu2019s March on Washington, making it the largest single-day protest in our nationu2019s history. Many women from Erie rallied to join the cause, including Alayna Gallagher (foreground).

Sunday, January 21 marks the first anniversary of the largest single day protest in the history of the United States. Women from across the country awoke before the sun came up, positioned pussy hats atop their hard heads, made delightfully scathing protest signs, and united together. This anniversary date means one thing: It's time to do this again.

More than 500,000 women descended upon Washington D.C. and an estimated 3 million participated across the country one year ago. Nearly 3,000 women (and men) showed up in Erie. Battle cries for healthcare, workers' rights, women's rights, LGBTQIA rights, and anti-discrimination policies were loudly chanted in the nation's capital, in Erie, and all across the country. The newly sworn-in Trump administration had nothing on us now … or did they?

I woke up at 2 a.m. on that comparatively mild winter day to catch a bus to DC with my mom, but before I knew it, having been swept up amidst the feelings of empowerment and promise, I ended up back on a bus to Pennsylvania at 7 p.m. overly tired, but too energized to sleep. I was ready to follow the "10 Actions for the first 100 days" with the Women's March app I had just downloaded to my phone. "We can do this!" we repeated. Grassroots activism is our new path, I was sure. Maybe we fell asleep and became too comfortable during the Obama Administration but we sure as hell weren't sleeping now.

Local Republicans were emboldened by the Trump administration, and seemed to be coming for all of the gains made since 2009, including some of the progress made during the last Republican administration. We had no choice but to fight back. Women's reproductive rights, healthcare reforms, abolishing the Dreamers Act, removal of transgender troops from the military, more healthcare scares, another tax "reform" scam. It was all on the table and the outlook was grim.

None of us actually want to be outside Pat Toomey's office at 3 a.m. or crashing a Mike Kelly fundraiser at Molly Brannigan's during an Erie snow and ice storm. This is emotionally and mentally draining and even physically tolling at times, but what choice do we have? We have to band together or die separated. This is why we marched, right?

The mission of the Women's March was to harness the political power of diverse women and their communities to create transformative social change. As women, we need to stick together and live that mission.

The Women's March began as a women-led movement providing intersectional education on a diverse range of issues and creating entry points for new grassroots activists and organizers to engage in their local communities through training, outreach programs and events. Women's March remains committed to dismantling systems of oppression through nonviolent resistance and building inclusive structures guided by self-determination, dignity and respect.

Now, take a look around you, Erieites. You don't see too many women in politics and we certainly don't see a whole lot of change, but we are definitely working on it! The progress is apparent. Our City Council went from having one female representative on council January 21, 2017 to now having three women sitting on council, Kathy Schaaf, Liz Allen, and Sonya Arrington, who will serve as council president in 2018.

And, dare I say most importantly (as the proud campaign manager), Erie elected Pennsylvania's first transgender candidate in the entire state of Pennsylvania when Tyler Titus won a seat on the Erie Public School Board. These wins may very well not have been possible without a catalyst such as Women's March.

For every elected official, there are hundreds more working tirelessly for this women's movement. Without the hard work of women like Paige Bosnyak (field organizer of Planned Parenthood), Marty Nwachukwu and Kate Koehle of Erie County United, Cindy Purvis and myself of Keystone Progress, Molly Brechtel of the Service Employee's International Union (SEIU), and April Weis of the Official Women's March, this movement would not have the power and influence that it does.

This is exactly what the mission of Women's March is about — diverse groups of women bringing their communities together.  So, listen up, Mike Kelly, Pat Toomey, Scott Wagner, the Erie Good Ol' Boys club … and all you other old white men calling the shots around here. Let me be crystal clear here when I say: We are not wombs, we are women. We are still here. Yes, we are exhausted, bruised and bleeding. But we are stronger. We are smarter. And we are coming for you and your precious gerrymandered seats.

Please unite with me again January 21st at 1 p.m. in Perry Square, and beyond. Our battle cries need to be louder than ever. We must work together to vote out the old and bring in the new. This is our moment to step up once again. Let us run for office, empower and mentor younger women, help Erie residents register to vote, drive them to the polls, and do whatever it takes to take our power back. The time is now.

Alayna Gallagher is a community activist and president of Keystone Progress. She can be reached at Gallagher.alayna@gmail.com