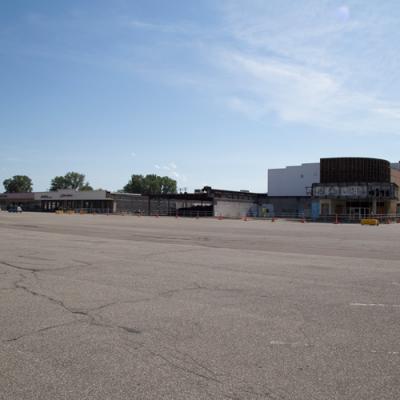 Long before the marquee came down at the Plaza Cinema in West Erie Plaza, the Plaza lights had gone dim. Several businesses remained there despite the fact that the property had not been upkept in any substantive way for several decades. It's hard to renovate around tenants, on one hand, and it's pretty easy to ignore age and time, on the other.

A map of the fully stocked West Erie Plaza published in the Erie Times-News in 1971 thanked Millcreek Police for making the plaza "a safe place to shop," and in the top corner of the advertisement an invitation to potential shoppers read "free parking for thousands."

By the time Erie-based development firm VCG Properties acquired the Plaza in 2012, it had literally been decades since the parking lot – or the storefronts, for that matter – accommodated thousands. In recent years, the plaza became little more than a relic, supporting its few remaining tenants, but serving most people with only a dose of nostalgia, be it memories of the music lessons taken in Osiecki Music or the kisses stolen in a dark theater at Dipson's Plaza Cinema.

"Let's just erase the last 30 years," says Chris Conrad, managing director of VCG Properties. "Let's look at the beginning. You went to the Boston Store, you went to West Erie Plaza. There's a lot of history here. That means there's a lot of memories here too."

Those memories and the history of the West Erie Plaza – a formerly bustling destination complete with department stores, grocers, and even miniature golf – is at the heart of its redevelopment. Bricks from the movie theater complex, some inscribed with reflections of former patrons, are being incorporated into the design. 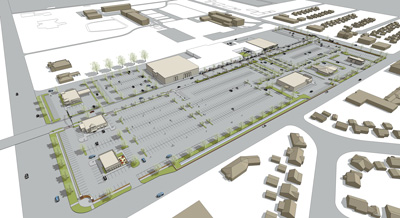 VCG also set up a suggestion box on site before construction began and established a Facebook page to solicit feedback on the redevelopment and to keep the public engaged in the process. Most of the comments were positive, but many people wanted to preserve the old theater.

"I walked into the theater, and I wanted it to work," Conrad remembers. "It was a great space, but it wasn't a viable structure. There was just too much deterioration." The cinema marquee has been crated for safekeeping and is incorporated into the final site plan.

Moves like that are an attempt by developers to show the public that they understand what the space once meant to the community.

The redevelopment has entered phase four of the project. Much of the demolition work is complete. Tenant spaces are being redefined.

"I think people see the work we've done and the different tenants that we've already brought in and they want to be a part of it," says Chris Greene, a managing partner in VCG Properties.

Hertel and Brown Physical Therapy and Dairy Queen occupy the plaza's only renovated spaces at what will eventually be the north end of the plaza, once the movie theater is completely removed. The rest of the structure is literally wide open.

"We took the bones of the building down to the nitty-gritty. The only things remaining are the firewalls. Everything else came out so that we can define the space as best we can," Conrad says.

VCG Properties is treating this as an opportunity to bring to Erie the kind of outdoor mall that other communities across the country have experienced since the beginning of the post-mall revolution in the late 1990s. If you've traveled or lived outside of Northwestern Pa., you've probably experienced this kind of community centered retail space. Wide pavements, bike lanes, and greenspace where people can sit, meet, and enjoy the space define the area. You spend as much time milling around and hanging out as you do shopping.

"We want people to loiter," Conrad quips. "We went through a three-year planning process where we researched what tenants want, what shoppers want, what's working and what's not working across the United States and beyond."

And apparently what shoppers and tenants want is not your grandparents' stripmall, but it's also not exactly the big box plazas to which Erie has become accustomed. In those developments, small tenants are situated next to a major retailer, like the Target or Walmart plazas on upper Peach Street. Conrad and company understand that model; it's tested and it works – it's just not their approach.

"Placemaking defines your space," says Conrad. "It defines your future. It defines your tenants. So if you start by placemaking and you create a destination where there is already traffic, you have the conditions to bring in the right kind of tenants."

Greene says he hopes to see a full compliment of tenants and completed renovations on the mall structure by late Spring 2016.

If public feedback is any indication, the community is as hopeful as the developers for a successful tenure. A ten-year old dropped a note in the suggestion box asking for a dog park to be included in the plans. After signing the suggestion, the kid wrote three times, "We can do this."

It sounds like someone's ready to make new memories under those old plaza lights.