Weyes Goes Out of the Woods and Onto the Stage

The local hip-hop artist has been on the rise in the music scene lately. 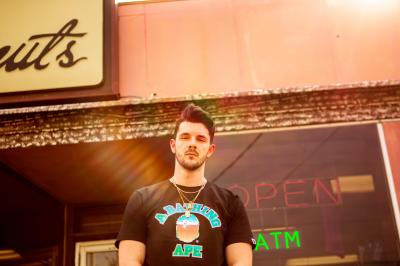 He "came a long way from the thistles and thorns" and deserves to be "feeling way better than ever before." Lyrics from William Weyes' newly released song, "Thorns" speak volumes as he is prepared to make his local headlining debut.

"This is the first step in a very long journey. I have been doubting myself for a while, but that is all going away due to the support that I continue to receive," expressed Weyes. "I'm glad that people enjoy what I make and that they can find use and relate to the music I produce. That is why I am so excited and grateful for this opportunity."

The local hip-hop artist has been on the rise in the music scene lately. Weyes is known for his introspective lyrics that go into depth on his real life experiences with depression and anxiety, as well as his firsthand experiences with the darkest aspects of relationships and the bright side that lies ahead. "I intend to be honest with you and the things that you hear have actually [happened] to me," says Weyes. Produced by Pittsburgh's Big Jerm who has worked with artists such as the well-known Wiz Khalifa and Mac Miller, Weyes' rapid-fire rhymes are backed by the best of the best trap-beats with a touch of ambient synth textures which create depth and atmosphere to his music. Also with a resume including collaborations with RIFF RAFF, D-Roc and Hardo as well as opening for Chief Keef, K Camp ,and the Ying Yang Twins, Weyes continues to make a name for himself.

His show will also include a variety of other performers such as Walkman, an artist from Pittsburgh who was recently featured in the song "Like You," and First to Eleven, the Erie rock band that recently eclipsed 400,000 YouTube subscribers. There will also be support from local up-and-coming artists Sammy C and ROG. A special guest from Atlanta, Kanayo King, is expected to make an appearance to perform a previously unheard song with Weyes.

"I want this event to be very inclusive, everybody to have a good time and I hope we can all help each other reach new heights in the future." — Symone Crockett