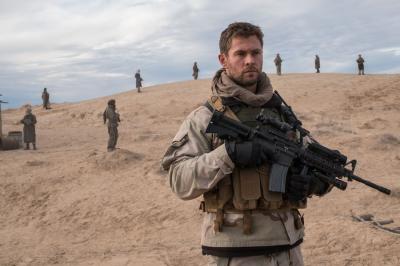 I'm sure the recently declassified story of the CIA agents and soldiers who became the first response to the Taliban in Afghanistan following the 9/11 attacks is an incredibly intriguing one. 12 Strong, the movie ostensibly based on the incident however, settles for every bland cliche and predictable story development in the war-movie playbook.

As we follow this team of heroes into the heart of Afghanistan, the director hits us with every tired trope and plot point. We have the inexperienced captain (Chris Hemsworth) who desperately wants to prove himself, the gruff, battle-hardened soldier who befriends a cute little kid, the locals who at first refuse to fight only to heroically ride into battle at the last minute, and of course a few scenes of the families looking concerned back home. It's all so by-the-numbers that it becomes boring, but the worst parts are the scenes of atrocities committed against nameless Afghan civilians that serve no purpose than to show us that the Taliban are bad guys and to strengthen the morale of the American soldiers.

The action is well-done I suppose, but by the end it goes on for such a mind-numbingly long time that it starts to feel like Rambo III rather than a supposedly true story. In the end, I just had a headache. War movies have moved beyond this kind of simplistic storytelling and 12 Strong is nothing we haven't seen a thousand times before. — Forest Taylor