Ten books by local authors worth diving into 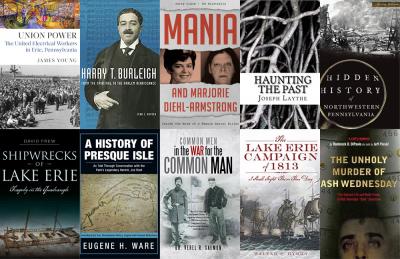 For me, it's diving deep into history, often of the local variety. If you're looking for some book recommendations of (relatively) recent releases of local history that are still in print, look no further. While some are available immediately on Kindle, if you prefer hard copies like myself, you can still reach out to our locally owned bookstores, such as Books Galore and Werner Books even if their physical locations are closed (or save this list and visit them when they reopen).

Pressed, located in Greengarden Place on West 8th Street, is also still accepting book orders on their website or through their email: pressedinfo@pressedbooks.com. You place your order through and they will contact you. Shipping is free of charge on any orders of $30 (and any below are a modest $4 shipping fee). As my six-year-old would say: easy peasy lemon squeezy.

Whether it's your favorite local history book, fiction book, or book of poetry though, be sure to share them with your friends, family, and social media feeds in these coming weeks. For most, the distractions will be welcome.

As for my list, this is by no stretch comprehensive (and I'd encourage you to share your own suggestions in the comments), but here are some excellent books to get you started:

Written by a former Edinboro University professor, Union Power covers the long, complicated, and fascinating history of Erie's United Electrical, Radio, and Machine Workers Union from the 1930s through modern day. It is a masterful work of local labor history (full of some wild stories, particularly during the era of McCarthy) and, frankly, a must-read for anyone living in Erie today who really wants to understand our city.

Harry T. Burleigh: From the Spiritual to the Harlem Renaissance

I've written about Harry T. Burleigh in the Reader before, but if you are looking for an in-depth profile of one of Erie's most iconic historical figures, Snyder has written an incredibly detailed examination of Burleigh, his family, and the often-overlooked impact that he had on American music. His life is an HBO or Netflix miniseries waiting to be adapted.

Mania and Marjorie Diehl-Armstrong: Inside the Mind of a Female Serial Killer Book

When local Erie-Times News journalist Ed Palattella and retired FBI Agent Jerry Clark team up for a book, you know it is going to be hard to put down. From Pizza Bomber: The Untold Story of America's Most Shocking Bank Robbery to their most recent book On the Lam: A History of Hunting Fugitives in America, the two always deliver engaging, thoroughly researched, and personal true crime stories. In Mania, which came out the year before Netflix's massive hit Evil Genius, the duo dives deep into the mind of one of Erie's most notorious figures.

Haunting the Past: History, Memory, Dreams, and the Reflections of a Dying Historian

The title might suggest a somber read, but for those who knew the legendary Edinboro University history professor Dr. Joseph Laythe, it's probably no surprise that his last book (even in its incomplete form, as it was written while he was dying from cancer) is a thoughtful, inspiring, and sometimes amusing look at his own life, career, and the unexpected joy he received in the classroom, along with his personal reflections on history, memory, death and how those intertwine. You can also watch his final moving lecture given on Edinboro University campus on YouTube.

Hillburn, the historian and head of reference at Titusville's public library, has written an excellent collection of stories related to our little corner of Pennsylvania: explore the life of Titusville native John Heisman, learn about the esteemed Battles family of Girard, revisit your childhood through the tale of Marx Toys, among so many other fascinating local tales. Hilburn also runs the Titusville-based website NWPA Stories.

Shipwrecks of Lake Erie: Tragedy in the Quadrangle

Back in college, I checked a book out of my campus library called Midnight Herring: Prohibition and Rum Running on Lake Erie. It absolutely blew me away. Prohibition had always seemed like something out of old mob movies or dime novels, but these stories were right in our backyard. I have never heard any of them. Since then, I've read everything written by Dr. Frew, who has taught at both Mercyhurst and Gannon and published other local tales such as Perry's Lake Erie Fleet: After the Glory. This book accounts for the numerous boats that went down in the surprisingly treacherous waters of our Great Lake.

A History of Presque Isle: As Told Through Conversation with the Park's Legendary Hermit, Joe Root

You don't know Presque Isle's history unless you've read the many books published by Mr. Ware, former chairman of the board of the Tom Ridge Center Foundation and the Presque Isle Partnership. He also writes regularly about the peninsula for Go Erie. This particular history takes a unique approach: it's imaginatively told through the eyes of Presque Isle's most famous figure: Joe Root. If you have young children, he and local illustrator Randall E. Austin recently collaborated on a children's story about a turtle and rabbit titled Tucker and Ripley's Adventure on Presque Isle.

Common Men in the War for the Common Man

A comprehensive, 800-plus page examination of the 145th Pennsylvania Infantry during the Civil War. The 145th was organized in Erie and would ultimately be involved in over a dozen battles throughout the war, including the Battles of Antietam, Fredericksburg, and Gettysburg. This is an impressively crafted story told through the words of the soldiers themselves.

The Lake Erie Campaign of 1813: I Shall Fight Them This Day

Rybka, who was the longtime captain of the Brig Niagara, has spent his entire life engulfed by maritime history. Here, he tells the familiar tale of Oliver Hazard Perry and the events culminating in the Battle of Lake Erie, but from his unique perspective as the man who knows the Niagara better than any other. For those looking for a fresh take on the Battle of Lake Erie, this is worth the read.

Jim Wertz wrote about "Erie's Goodfellas" in 2014 when the book was first published. It's not an easy book to describe, but from the book's description itself: "Just hours before kickoff, begging for mercy on his knees, [bookmaker] Frank Dovishaw lost not a wager, but his life. The execution-style gangland murder set off a series of events for Erie's top homicide investigator that would span nearly seven years, touching upon virtually every aspect of the lakeside city's dark underbelly, and reaching from Pennsylvania to Ohio, Indiana, Michigan, West Virginia, and Florida. Along the way, it became the story of dirty cops, hitmen, drug dealers, crooked lawyers, and co-conspirators who abandoned omerta, their code of silence." It's a fascinating tale that could be right out of a Scorsese film.