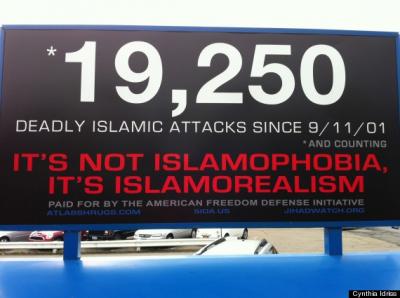 An "anti-jihad" ad has been pulled from circulation in both New York City and San Fransisco at the request of the family of James Foley. The ad itself depicted Foley moments before his execution at the hands of ISIS with the words "IT'S NOT ISLAMOPHOBIA...IT'S ISLAMOREALISM," and was intended to launch today. Despite this individual ad being pulled, there are still many similar ads in circulation meant to instill fear and hatred for the Islamic faith by targeting non-Muslims. However, the creator of the ads, Pamela Geller, maintains that the ads are merely anti-jihad and that it is the Quran itself that incites these actions.

House Speaker John Boehner has stated that he may call Congress back to questioning America's military involvement in Syria. According to him, it was innappropiate for a "lame-duck" Congress to vote on a military matter so close to the end of many member's terms, when those replacing them would not be eligible to vote until January. Boehner has said that he may bring the issue back to the foreground at the beginning of next year if President Obama sends any resolution asking for military authority.

Search for Eric Frein Heats Up

The manhunt for Eric Frein has taken up shop in a rural neighborhood of Snow Hills Falls. This comes over two weeks after the manhunt began with Frein killing a cop. There have been multiple sightings of Frein since, which have helped authorities narrow the field of search drastically. This narrowing has placed them primarily in the small, typically quiet town of Snow Hills Falls, though authorities stress that this is not the only place they are searching. The suspect is still at large.

Read all about it at post-gazette.com

After being charged with six counts of judicial misconduct in July, Judge Stephanie Domitrovich has finally received her ruling. She will be able to maintain her postion as a judge, despite the allegations brought against her by the Pa. Judicial Conduct Board that she was rude, disrespectful, and impatient in the courtroom. The ruling came after both sides made their arguments before a court in Harrisburg.

Trout Stockings to Come This Week

Oil Creek and Shenango River will both receive a stocking of trout for the fall season this week. Authorities are asking for people to meet this week to help aid the stocking of rainbow trout. The stocking was limited to these two bodies of water after what authorities are calling "...a lack of angler interest and trout stocking participation." Fishing has always been a major pastime in the Erie area.

For more information, go to goerie.com