Courts have ruled, books have been sent, and one man is still wandering around the woods somewhere. Here are five top news stories neatly summed up for your convenience. 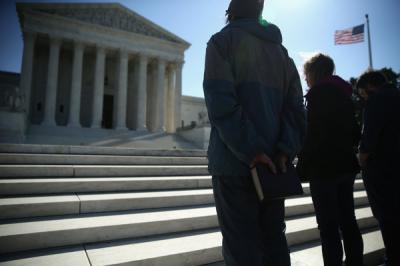 A federal judge has ruled that the Police Department in Ferguson that responded to the protests was in violation of the constitution when they mandated that the protestors could not stand still. Some officers told protestors that they could stand still for no more than five seconds, while others told protestors they were simply walking to slow. The judge issued an injunction, stating her concern that these illegal tactics are likely to be employed again.

The Supreme Court let stand five appeals court rulings that allow same-sex marriage in five seperate states this Monday. Those five states are Indiana, Oklahoma, Utah, Virginia, and Wisconsin. Beyond raising the number of states allowing same-sex marriage from 19 to 24 with this ruling, the Supreme Court may have paved the way for even more widespread marriage equality throughout the country. Opponents of marriage equality are outraged, though they may be losing steam.

"This guy is not Jason Bourne," said Greg Hall, the Sniper Section chairman of the National Tactical Officers Association. While suspected cop-killer Eric Frein has still not been found, authorities are still hopeful. With the impending winter, it will be difficult for Frein to maintain his supplies and his health if he is confined to the deep woods. Beyond that, as the leaves begin to fall Frein will be more visible to surveillance teams. And while it may seem like a long time for a manhunt, Frein by no means holds the record for time on the lam.

To read about other fugitives who have lasted longer than Frein, go to nbcnews.com

Books Being Delivered to Erie

Erie and Houston, Texas were the only two cities to receive a massive donation of books, and those books came yesterday. Thanks to "Hooked on Books for Kids of Erie", 40,000 new books were delivered to the Shred-W Warehouse on West 22nd Street, were they will be sorted and distributed to underprivileged children in the area. The books are expected to be distributed this Saturday.

For more, check out yourerie.com

Edward Melton of Albion, PA is no Walter White. Melton was sentenced yesterday to one to three years following an incident this spring involving the explosion and subsequent fire of his meth lab. He plead guilty to charges of conspiracy to manufacture and deliver methamphetamine. He will serve his sentence following a 9 to 30 month DUI sentence.