All's quiet on the homefront going into this week, but big things are happening in the international community. Are you up to speed? 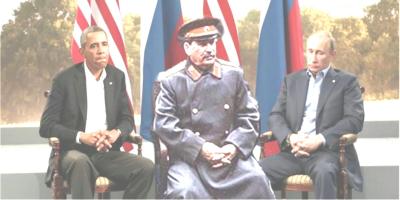 US ramping up major renewal in nuclear arms

In a move that is being viewed as highly controversial for the Obama administration, the US has begun initiatives to facilitate the development of new nuclear arms programs across the nation. This effort comes on the heels of Russia's declaration last week that it would be doing much the same alongside accusations from Putin himself that the US currently aims to start the next great international arms race.

Full report on the new nuclear programs at  www.nytimes.com

In yet another display of his commitment to work cooperatively with other nations to curb growing international terror threats, President Obama will preside of a meeting of the United Nations Security council later this week. The meeting will be focussed on urging nations to institute domestic laws that will seek out and punish international travelers who relocate to join terrorist groups, or support terror in any form.

For more on the upcoming meeting visit www.nytimes.com

At New York march, Clarion call for action on climate

Manhattan saw the first major protest in some time geared towards inaction in the realm of global climate change this past Sunday. The event saw an impressive turnout, and attracted environmental advocates from all walks of life to participate and weigh in on the issue at hand. Both Al Gore and secretary general of the United Nations, Ban Ki-moon made appearances to demonstrate the sustained government concern over the issue of climate change.

For more on the march visit www.nytimes.com

Chinese foreign policy has recently shifted focus to increased efforts to ensure the "internal security" of the nation. Similar past efforts have caused notable communications disruptions in the past, and most recently has had a negative impact on Google's attempts to conduct business with the burgeoning international economic force. Despite demands that China's communications restrictions be loosened to facilitate ongoing market action, legislation in Bejjing has failed to respond with any sign of change to this policy.

As of Sunday the search continues for the suspect in question for a recent attack on a state police barracks in northeastern Pennsylvania. Despite growing concern over the amount of time that suspect, Eric Frein, has remained at large, law enforcement authorities maintain confidence that the he will be found and brought to justice.