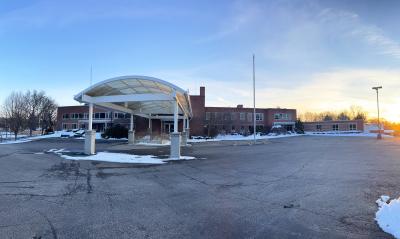 The hulking 88,000-square-foot Corry Area Memorial Hospital is slated to become the site of the Corry Area Technology Center and Hub (CATCH), a home for high-speed fiber internet, a cloud storage system, a tech incubator, a tech job and remote career training center, a co-working space, and a daycare center focused on early technology education.

On Feb. 22, from the comfort of my couch, I learned about news coming out of Corry, Pennsylvania. As reported in the Erie Times-News by Valerie Myers, community leaders in the most southeastern city in the most northwestern county of Pennsylvania are making moves to launch the Corry Area Technology Center and Hub (CATCH) in the former Corry Memorial Hospital.

Myers' lengthy and thorough feature details the ambitious aspirations to convert the hulking 88,000-square-foot building that's sat vacant for a decade into CATCH — a home for high-speed fiber internet, a cloud storage system, a tech incubator, a tech job and remote career training center, a co-working space, and a daycare center focused on early technology education.

I read about the big news in Corry not in the pages of the paper (although I still love the smell of newsprint in the morning), but on my laptop's screen (which, between that and my iPhone, is where I consume mostly all the content I read or watch or listen to). It was easy to do — from the couch to the screen to my eyeballs — thanks to a reliable, stable internet connection that I worry little about when I'm home.

As it stands today, 19 million Americans can't say the same. That's the number, according to the Federal Communications Commission, of folks nationwide without access to broadband internet.

"Gig fiber" has become shorthand for capturing equitable internet speed over fiber optic cables measured in at least 1 gig both down and up. There are 1,000 megabits in 1 gigabit. So, at 25-3, some users are experiencing a fraction of the speed of the internet than others.

According to the most recent FCC data on broadband deployment, just 17 percent of Erie County, Pennsylvania residents have access to fiber broadband. The majority who access broadband do so over cable or DSL. The same data reveals that nearly 10,000 Erie County residents are without access at all.

Plenty has been — and continues to be — written and said about the digital divide. Strides to narrow that gap have been made over the years. According to PEW, just 1 percent of U.S. adults living in urban and suburban areas had household access to broadband in 2000 — an era when dial-up internet was still king. Zero percent in rural communities reported having access that year. A decade later, the percentages jumped to 64, 63, and 52, respectively. By 2021, it was 77, 79, and 72.

It's important to note that these numbers are for those who have access — not those that do access. As the FCC reported in its "Eighth Broadband Progress Report," "even in areas where broadband is available, approximately 100 million Americans don't subscribe."

But it's not as if a 1930s analogue doesn't exist to which we can look for inspiration and guidance. With the creation of the Rural Electrification Administration (REA) in 1935, President Franklin Roosevelt sought to address the divide of his era: Access to electricity. On May 20, 1936, congress passed the Rural Electrification Act, providing loans for rural electrification projects. Just 17 years later, more than 90 percent of farms had access to electric service. Something once seen as a luxury became a necessity.

"Our hope with CATCH is to not only support current industries but make the pivot to Industry 4.0," says Brody Howard, executive director of the Corry Higher-Education Council. Industry 4.0 — also referred to as the Fourth Industrial Revolution — began to be popularized around 2015 in efforts to make sense of and anticipate rapid changes in technology and industry and the implications they'd bear on society and culture.

While the strategic plan addresses a range of issues, connectivity, tech, and industry are areas Howard is working to address as a "local champion," a term given to volunteers in the community stepping up to turn the plan from words on a page to accomplishments in the community.

"This is the most important time for rural communities to find their place in the innovation economy," says Chuck Gray, executive director of Impact Corry, the organization behind getting a strategic plan produced that is now guiding implementation. "If they don't find footing now, I don't know how they find footing ahead."

Finding footing and moving forward in the innovation economy in Corry has begun with the Greg Pike family donating the Corry Memorial Hospital so that the space for CATCH can be created. Next up is, well, a lot, but folks in Corry aren't ones to sit on their hands.

In the traditional sense of a tech center, CATCH will house a data center and offer training. In a less traditional sense, training is being approached from a "whole life cycle based around technology," Gray says.

Howard is working on developing a curriculum for training through the Hi-Ed. Training will range from skills-retraining for today's workers looking for tomorrow's jobs, as well as focusing on beginning tech-focused education at the pre-K level.

He says he sees what's happening in Corry as a "once in a lifetime opportunity."

"Being able to have this growth opportunity, not to have to be a scrappy small town just trying to survive — we're not talking about survival, we're talking about being able to thrive," Howard says. "There's this drive for education, for innovation — to tap into that potential we've never had before."

That potential isn't limited to Corry. And the folks there recognize that.

"We do not rise or fall alone," Gray says. "We have a commitment to take what we've learned to other communities to help them get the connectivity they want."

In the short-term, that means not just deploying fiber through the city of Corry but including the entire Corry School District. The school district spans over 210 square miles over three counties — Erie (where Corry is located), Crawford, and Warren — with a population of 14,819. In Corry, the population is just over 6,300.

Also in the works: the Union City School District.

"This is our duty to be a part of a regional community," Gray says. "We want to be sure we're playing a part in a bigger system."

There's plenty of work ahead yet — from creating a request for proposal for providers, to curriculum development, to hiring for jobs now that'll help build out the jobs of tomorrow, and plenty more. But what's clear so far is that the community of Corry has come together to create a strategic plan and is now working to carry it out at a pace that matches the speed of the internet they hope to deploy. And they're carrying it out with the goal to have the impact felt beyond the city of Corry.

"CATCH is one of the most important things we're doing at the present moment to contribute to our region, to our nation, to make ourselves a prosperous place to be," Gray says. "CATCH is important not just because we're bringing technology, but because of the opportunities that will be present."

How long will this all take? We'll need to refresh our browsers. But if innovation in Corry is to be measured today, it's safer to see it not in megabits but gigabits and as a replicable model for community development to be copied and pasted throughout Erie County and beyond.