What's in a Name?

How a roller derby girl gets her name...

by Jay Stevens
View ProfileFacebookTwitterGoogle+RSS Feed
November 17, 2011 at 11:28 AM 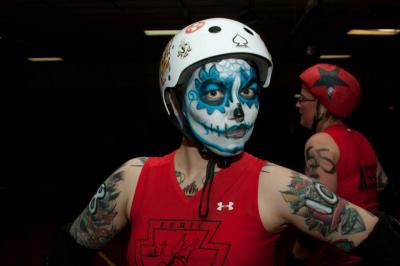 Here's the original opening of the roller derby cover that appeared this week. After the first draft, the piece was about 1,200 words too long -- nearly three single-spaced pages -- and this got cut. Still, I like it -- and hope you do, too. It's all about the derby names...

The single most important act of self-determination in the career of a roller derby girl is the selection of her derby name.

It's not an easy task. A good derby name is a clever play on words that project corruption, sex, or aggression to its bearer. They range from the crude – "Ace Hole" or "Fanny Fister," say – to a funny combination of words, like "Eye Candy Stroy." Some riff off of celebrities or famous historical figures. "Skatey Gaga." "Feara Nightly." "Awesome Welles." Alcohol is popular, too. "Absinthe Minded" or "Buzz Lightbeer." And there are the classics: "Wreckanomic Stimulus." "Call of Booty." "Wounder Woman."

A good name conveys something personal. On the Eerie Roller Girls squad, examples abound. "Mad Flasher" is a professional photographer, and the "The Naughty Professor" teaches college math. "Ginger Vixxen" has bright red hair. "Shell Shocked" and "Chris T Bone" play off the names, "Shelly" and "Christy". "Sybille Disobedience" is a motorcycle-riding politically-minded intellectual. "Hemorrhoidal Rage" is...well, there are some questions even I shy away from.

The list of names goes on. And, yes, there is a list. It's kept at twoevils.org, and it's where the roller derby girl submits her name once she's committed to the sport by participating for a certain length of time – thirty days for the Eerie Roller Girls. The website owner checks the submitted name against the list to ensure her name doesn't encroach on any other. After approval, which can take up to four months, the derby name belongs to the skater as long as she skates. It follows her everywhere. She'll see it on the official roster, she'll hear it over the PA at bouts. It's the name used at roll call during practices, the name the other skaters call her, the name that appears on the website and, if she's lucky, on her roller derby trading card.

That's to say, despite its outward campy appearance, its irreverence and vulgarity, the roller derby name is serious business.

In that way it's a lot like roller derby itself.