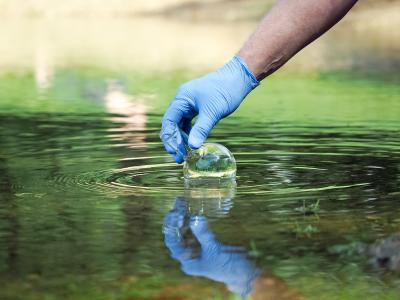 Come the warmer months, millions eagerly take to Pennsylvania's more than 160,000 combined acres of lakes and more than 86,000 miles of streams and rivers. Unfortunately, the water doesn't always take so kindly to humanity's collective activities. The phrase "you only get back what you put in" definitely applies here.

The Pennsylvania Department of Environmental Protection (DEP) recently released their 2020 Integrated Water Quality Monitoring and Assessment Report, an effort to catalog the health of the Keystone State's H2O. The report is required every other year under the directives of the Federal Clean Water Act, because if the government were to have us die of one thing, it wouldn't be dysentery. It is made publicly available so residents can educate themselves and local decision-makers can adjust their plans and policies accordingly.

Using an interactive map, users can zoom in on individual waterways of most interest, filtering them out like their municipalities should've done decades ago — this is online streaming in the very literal sense. Of most interest to the City of Erie and its neighbors, of course, is Lake Erie.  Being the massive interstate and international body of water that it is, only Presque Isle Bay and a thin ribbon of agua along the lakeshore officially falls under the scope of the report.

So how does our stretch of shore fare? Well, it should surprise no one that there is work to be done. Bodies of water achieve attaining (passing) or impaired (failing) status according to whether they meet criteria for state-defined protected uses:

As of 2020, Presque Isle Bay was judged as impaired for recreational use and fish consumption. The reasoning for recreational impairment is vaguely stated as "pathogens," but we can assume harmful algal blooms and the occasional E. coli outbreaks are implicated. Fishers of Presque Isle Bay face a much more clearly identified hazard — polychlorinated biphenyls (PCBs), which are exactly as fun as they sound.

PCBs were once commonly employed in dielectric and coolant fluids, carbonless copy paper (as you'll recall, Hammermill Paper Co. was once headquartered in Erie), and heat transfer fluids. They have been linked to cancer, hormonal interference and imbalance, lesions of the skin and eyes, and lowered immune response, among other things. Although their continued manufacture was outlawed by the U.S. in 1978, they are what's known as a persistent organic pollutant or "forever chemical" because they tend to resist environmental degradation — in other words, they stick around longer than bad breath.

As such, Presque Isle Bay was classified in the report as Category 5 — impaired and requiring the development of a total maximum daily load (TMDL). A TMDL gives environmentalists an idea of how much more yuck (in parts per million) a body of water can accept before it's too yuck. If the maximum daily load of pollutant is exceeded, the water is no longer attaining quality standards. Once a TMDL is developed, Presque Isle Bay would fall under Category 4, or simply impaired. The other assessment categories are as follows: Category 1 (attaining for all uses), Category 2 (some uses not met, but insufficient data to quantify), and Category 3 (unassessed or insufficient data).

One last thing to note in regard to Presque Isle Bay (Lake Erie) is its lake trophic status, or level of biological activity. Higher biological activity (eutrophism) indicates presence of more abundant nutrients such as nitrogen and phosphorus, which is great if you're an aquatic algae or plant, but not necessarily if you're from the animal kingdom. Oligotrophic ("few nutrient") waters are clearer, more oxygenated, and best for drinking and swimming around in. Mesotrophic waters such as Presque Isle Bay are somewhere in between, but an influx of nutrient-rich runoff can quickly send biological production spiraling. This is why the TMDL is so important, as it sets discrete limits for agricultural and industrial byproducts.

Before you fret about our bay becoming a festering bog, take heart that environmental remediation efforts have been ongoing for decades. It's just that we humans have been around all that time doing all the various disruptive, ecologically unfriendly things we tend to do, too, and those impacts must be offset. It's refreshing to drink the Kool-Aid, but wouldn't it be so much better without the need to strain the Kool-Aid solvent through a Brita filter first?

Matt Swanseger (mswanseger@eriereader.com) was once an avid Kool-Aid drinker until he was betrayed by the abrupt discontinuation of  several beloved flavors, notably Solar Strawberry Starfruit. So to forget, he started drinking beer instead.