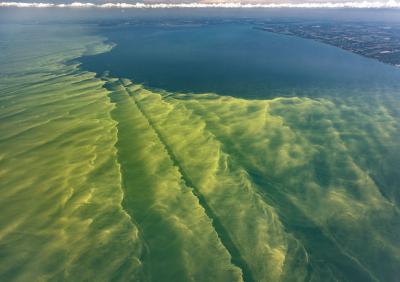 The poisonous algae did not test high enough to concern humans, but dogs can suffer liver damage, respiratory paralysis, gastrointestinal disease, and other fatal issues. Social media was quick to pick up on these warnings following viral posts of dogs in North Carolina, Georgia, and Texas dying after swimming in local ponds and lakes.

Breanna Adams, director of environmental health services at the Erie County Department of Health, said "dogs are more susceptible because of their body mass and the way they use the water (i.e. licking it off their fur, opening their mouths underwater)."

Known as cyanobacteria, the HAB is caused by fertilizer run-off into the lake, which provides extra nutrients to the biological growth. With calm winds and abundant sunlight, the bloom has increased considerably in the past few weeks. The Centers for Disease Control and Prevention asks that people use only the recommended amount of fertilizer in their yard to prevent further runoff.

In an article for The Erie Times-News, DEP aquatic biologist Nate Irwin said, "they (cyanobacteria) are a normal part of the system. They're in every water body around the globe."

In their Lake Assessment Report, The Pennsylvania Department of Environmental Protection (DEP) stated that the main water quality concerns in Pennsylvania lakes are due in part to eutrophication, a process resulting from gradual nutrient accumulation (sometimes referred to as "lake aging"). Although it is usually a slow process that happens to all lakes, the bigger problem is "cultural eutrophication" when what would've taken thousands of years is sped up to just decades because human influences are severe.

Adams said that E. coli can often indicate the presence of other harmful bacteria. The HAB tests are not regulatory but as a part of a HAB taskforce, they do test for it once a week from 25 different sites in the area to be proactive and raise awareness about the issue.

As reported by the DEP, a HAB often appears as blue or green scum on the surface of the water or as foam and can lurk beneath other plants. Dogs pick up the bacteria by ingesting it when swimming, licking it off wet fur, or eating any sand that could have remnants of the toxins.

It may physically show as the "pea-soup" color, but Adams said, "sometimes after a rainstorm or a windy night they might move away" as they are broken up and dispersed, not showing. Adams said that is why it is important to pay attention to the signs posted in the area because there may still be toxins in the water.

Recently in North Carolina, two dog owners took their three dogs to a local pond that was seemingly clear, but 15 minutes after leaving the water, one of the dogs started having a seizure. The other two dogs also became infected by the toxic algae and within hours, all three dogs were dead.

Although there have not been any deaths reported in the Lake Erie area, if you suspect your dog has ingested or come in contact with any algae, wash your dog with clean water immediately and wear protective gloves while doing so.

According to the United States Environmental Protection Agency, early symptoms of HAB poisoning in dogs may include staggering, weakness, diarrhea, vomiting, and convulsions.

In their statement regarding the Lake Erie HAB, The National Oceanic and Atmospheric Administration (NOAA) said if your dog is showing these signs, take them to a vet or animal hospital immediately.

Irwin said there are efforts being taken to reduce the amount of nutrients going into the lake, but his advice is, "if in doubt, stay out."

The advisories will be lifted once the toxin levels have decreased to a safe level. If the concentrations were to increase, recreational advisories would be put in place.

Stay updated by looking at the Google map put out by the Erie County Department of Health: https://www.eriecountypa.gov/county-services/health-department/environmental-services/beaches/current-beach-sampling-results.aspx