And now for your viewing pleasure, three films reviewed. 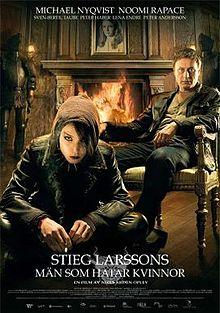 The Girl with the Dragon Tattoo (Foreign)

With Stieg Larsson's Millennium trilogy finding new relevance with the release of the American remake of its first entry, it seemed appropriate to give the original Swedish version of "The Girl with the Dragon Tattoo" a go. For those living under a rock the past few months, "Dragon Tattoo" follows a disgraced journalist who teams with a damaged punk hacker to investigate a 40-year-old murder, leading them down a trail of terrifying revelations and grisly secrets. While the American version retains some of "Dragon Tattoo's" edge, it favors a more stylized approach – courtesy of acclaimed director David Fincher, stars Daniel Craig and Rooney Mara, and the score by Trent Reznor. The Swedish version, however, possesses a gritty, almost ultraviolent, nature you just won't see in the remake. This could be in part because of the overall pulpy, cheap feeling the foreign version has, or it could be Hollywood's incessant need to strip down and alter source materials to reach a broader (i.e. American) audience. In the end, both versions are gripping psychological thrillers with their own charms.
GRADE: 4 Stars

Upright Citizens Brigade – ASSSSCAT! (Comedy)
As a longtime fan of the criminally underrated sketch series "Upright Citizens Brigade" (which had a brief three-season run on Comedy Central in the late '90s when their original programming was more bizarre than satirical), I walked into "Upright Citizens Brigade – ASSSSCAT!" with some pretty high expectations. Instead of sketches, what we have here is a taping of the troupe's weekly improvisation show of the same name that has become rather famous in the inner-circle of comedy. Featuring all four stars of the UCB series (including SNL alumna Amy Poehler), as well as guests including Horatio Sanz, Tom Lennon, and Kate Walsh, "ASSSSCAT!," in theory, should be an incredible hour of comedy, and yet watching a taping of it just seems to remove the zeal of what is surely a dynamic live performance. Fans of improv will probably appreciate this, but devotees of the UCB series should not expect the same level of humor here.
GRADE: 2 stars (spared from a 1 only because of the vast amount of talent on display here)

How Beer Saved the World (Documentary)
Beer—is there anything it can't do? According to this Discovery Channel documentary, no. The doc opens with a bold thesis statement: "Without beer we'd probably still be living in caves." And from there, "How Beer Saved the World" never ceases to amaze with how everything from the development of agriculture to the American Revolution to refrigeration to germ theory and modern medicine can be traced back to humankind's love of beer. The documentary does suffer from a short runtime, leaving some of the facts feeling a little glossed over, but the scientific and historical accounts given are nothing short of astounding. Plus, anything that proves all those beer bongs and keg stands I did in college weren't just drunken jackassery but for the greater good of man is okay in my book.
GRADE: 3 stars