For your viewing pleasure, three critically-acclaimed classics ripped from the Erie Reader Queue. 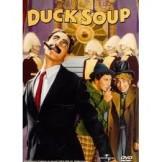 One of the Marx Brothers' most popular films, "Duck Soup" deals with an impoverished nation, Freedonia, who appoints a new—albeit unqualified—leader only to retain the financial backing of a wealthy widow. Meanwhile a neighboring nation wants control of Freedonia and the widow's fortune and dispatches spies to make it so. But the difference between "Duck Soup" and other satirical classics, like "Dr. Strangelove" or "The Dictator," is that the plot here is paper thin and is more or less only used to set up the next bit of schtick from the brothers—including the most famed iteration of the classic "mirror scene." I had never seen any work of the Marx Brothers before and yet a lot of this seemed familiar from the constant imitators/homages we've had since. But it does make for a good time. Fun fact: The city of Fredonia, N.Y. actually objected to the impoverished country in the film being named Freedonia, worrying it would hurt the city's reputation. The Marx Brothers retorted by telling the city to change its name to not hurt their film's reputation.
Grade: 3 Stars

Often hailed as one of the greatest foreign films of all time, Federico Fellini's 1963 Italian drama is a stunning masterpiece that interweaves the creative strife of a struggling director, Guido Anselmi, stuck on his next great picture, who is losing himself in the fantasies and memories of the women in his life, including his wife, his mistress, and his star actress. If the plot sounds familiar, it's because "8½" is the source material for the musical "9," which itself received the film treatment featuring an A-list cast a few years ago. While the latter preferred the highly visual and auditory  spectacle of song and dance pieces, the former has a slower-moving more artsy approach to its storytelling—but is no less effective or compelling in creating the desperate, dreamlike world of Anselmi and the women who befall his life. And speaking of the women, I don't think I've ever seen so many exotically beautiful women assembled in one single picture outside of a James Bond film.
Grade: 4 stars

"I should say that I am a visual person. I experience with my eyes and never, or only rarely, with my ears—to my constant regret," states a quote from "Metropolis" director Fritz Lang in the opening title card to Italian composer Giorgio Moroder's 1983 reimagining of the dystopian 1927 classic about class warfare and the industrial age. "Metropolis' " striking visuals have long served as inspiration for music videos from Queen to Madonna to Whitney Houston, but here is a full-blown version of the film for the MTV generation. Going with the abridged U.S. cut of the film, Moroder adds color tints, new effects, and, most notably, an '80s synth-heavy rock soundtrack featuring Freddie Mercury, Bonnie Tyler, Pat Benatar, and other then-contemporary groups. The music does fit the sci-fi scope of the film and adds to the moodiness throughout the picture. With that being said, I would love to see a second attempt at this concept using more modern, better-suited musicians like Tool, Radiohead, Muse, and Trent Reznor, as the biggest flaw here is the music feels incredibly dated, ironically more-so than the message and futuristic vision of the nearly 50 years older film.
Grade: 3 Stars