What's the Bogeyman?: Michael Myers is back again

'Halloween' is too uneven to be good 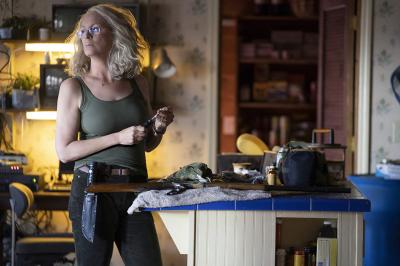 After 40 years, Michael Myers has returned. He's after the lone survivor of his first murder spree, but this time, she's ready for him and their showdown is going to be an all-out brawl. When I heard this news, all I could think was: "didn't they already do this in H20?". This new Halloween film proves conclusively that the series is perfectly content just being the same thing over and over.

Ignoring all the sequels (and the finale of the first film, I guess), Myers is now locked in a mental hospital and about to be transferred to a different facility. Unfortunately, Myers manages to escape and return to the quiet town of Haddenfield where his killings can begin again. However, Laurie Strode (Jamie Lee Curtis) has spent her entire life preparing for this moment. When she learns of Michael's escape, she rushes her family to her fortress-like home where she plans to finish Michael off once and for all.

There have now been 10 attempts to recreate the ingenious simplicity of John Carpenter's masterful original and every single one has fallen short. This new film doesn't even try to be anything different and runs on pure fan service alone. There are plenty of iconic kills but that's all the film offers. The remainder is filled with characters with confused and inconsistent motives, camera work that varies wildly from great (there's a terrific single tracking shot) to horrible (what's with all the unmotivated push ins?), and a lead actress who tries her best to breathe life into a character she has long since outgrown. If this is the best we can get from this horror franchise, let's hope he never comes home again. — Forest Taylor