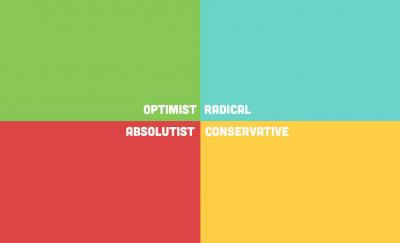 How would you direct the reopening of American social culture amidst COVID-19? Would your reboot be more nuanced and subtle, lingering on details, leaving space within dialogue and scenes? Or would it be rapid-paced and risqué, daring viewers to keep up?

In an article for IndieWire, veteran film festival director Noah Cowan outlines four basic schools of thought. As event organizers begin to plan again in earnest, it's interesting to ponder how potential attendees stack up philosophically.

The Film Society of Northwestern Pennsylvania recently surveyed followers about where they fall on this spectrum, hoping to use those insights to frame the future of its popular Film Grain: Dinner & Movie series (a Wednesday night mainstay since January 2018). For instance, a predominantly Conservative audience might be comfortable watching a movie in a room with strangers so long as everyone's wearing a mask and tables and seating placed far apart; a so-called Radical audience would not care. In between would be an Optimist who would be cool with chowing down in public so long as there were some controls in place (like a walk-up window for dinner). For Absolutists the point would be moot, as they wouldn't be there in the first place.

When the Film Grain series does return to the Bourbon Barrel this summer (or whenever it's deemed safe or legal to dine indoors again per local and state guidance), the downtown establishment may be under new ownership. Controlling partners Antonio Milone and Derek Smith recently put the whiskey bar — liquor license and all amenities included — up for sale this month and will offer transitional guidance to the new owners. Through the transition, Miilone and Smith hope that the State Street venue will maintain the community relationships (including with Film Society of NWPA) it's built up since opening in 2015.

Matt Swanseger (mswanseger@eriereader.com) would welcome the opportunity to watch a movie with you six or more feet apart, just as long as one of us doesn't start snoring.