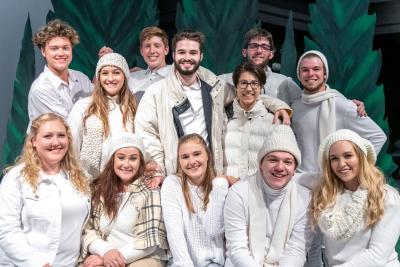 This past Thursday, I was excited to see Gannon Theatre's production of Almost, Maine, by John Cariani. I was interested to see how a college approached a production with an episodic series of scenes that deal with love and romance approached with either humorous or very serious takes on the topic of love. It is an interesting piece wavering between the stark realism of a disintegrating relationship to almost absurd interactions that combine a sense of fantasy and whimsy.

I should mention that this play, which tackles notions of adult relationships, has been a popular choice of high schools and colleges for the past few years. It was the top produced play in American high schools for 2017-2018. I point this out because the play is written with a sweetness and innocence that pervades the piece even when dealing with such heavy topics as grief, loss, and incompatibility. Gannon's young student actors who likely have never personally experienced many of these stumbling blocks in life have a chance to "play at being adults"; fortunately, they are savvy enough to grasp the humor or seriousness of the situations. One scene which has been deemed controversial by more than one school board has such charm and humor that I find it surprising that it could be found so objectionable. It involves two macho guy-friends, played with gravel-voiced humor by Justin Karns and Mike McGhen, who discover that their dating lives are unsatisfying, and the only time they are happy is when they are together. Their realization of their true feelings for each other is both poignant and hysterical to watch.

Not all scenes are as easy to knock out of the park. "Story of Hope" is bogged down with unconvincing dialogue, and the outcome of the scene seemed predictable. I believe it to be these weaknesses in the piece that made it difficult for the actors to be as convincing as they were in their other scenes.

My favorite scenes were the ones that took a situation that relied on some impossible metaphor and used that metaphor to make its point. One centered around a man, played to great comic effect by Gabe Gallagher, who was born with the inability to feel any pain and therefore is obsessed with comprising a complete list of things to beware of in life. His omniscient brother has made sure that women are included as part of the list, cleverly blurring the line between physical and emotional pain. This becomes a serious consideration when the attraction he feels for his neighbor, played by Rebecca Ropelewski, comes into play.

Another such scene involved a girl who has bundled the love her boyfriend has given her into plastic bags. The stage is filled with a huge pile of puffed up bags, giving us visual proof of the amount of love he has given to her. This then contrasts smartly with the tiny paper bag he produces to return the love she has given him. To say more would spoil the clever twist of this scene. Regan von Richter and Kyle Peck deftly controlled the amount of emotion and frustration they both felt as the scene unfolded.

I'm guessing the final scene was placed in that position because it ended the play on a note of hopefulness, centering on a seemingly mismatched couple who manage to find their way to being on the same page. Kyle Peck and Petra Shearer received the scene that had the most physical comedy in it, and they played it to the hilt. Very funny stuff.

Director Alaina Manchester, assisted by Nico Lombardo, obviously made it a priority that the actors worked hard to understand the implications of playing older, more experienced characters. The set and lighting design by Angela Howell and Isa Foltz created an ethereal landscape of pine trees, snow, and northern lights. It gave a sense of an open landscape where anything could happen, be it the mundane or the sensational. Every student had his or her moment to shine and rose to the occasion, contributing to this thought-provoking play. In addition to the aforementioned actors, the rest of this enthusiastic troupe included Hanna Livingston, Tom Swick, Emily Hall, George Meucci, and Jenna Halasz. – Bob Martin