Who Doesn't Like Pie? Two One-act Plays by Anne Pie Open at PACA 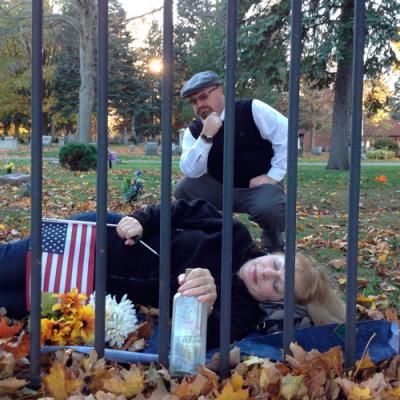 Pie is delicious. So are these two powerful comedies by Connecticut playwright, Anne Pie. The Remarkable Thing about Stardust and A Quiet Night at the Sanctuary are both one-act plays exploring human relationships on a small scale. Expect forceful and assertive dialogue that is, according to several reviews, written with a tender and understanding heart.

Stardust, directed by Bobbi Kocher, follows Diana Stern as she is arrested, drunk in a graveyard. The cracks in her marriage emerge, Diana cries uncontrollably, and a mystery is revealed.

Kocher says, "I'm a sucker for a story that has a 'twist.' New scripts are always a challenge, but in many ways easier to do than shows done before. You have no pre-conceived notions."

"I'm a sucker for a story that has a 'twist.' New scripts are always a challenge, but in many ways easier to do than shows done before."

Sanctuary, directed by Michael Weiss, tells the tale of two women — one a celebrity — trapped in a snow-bound diner. As a 20-year-old bottle of scotch loosens their tongues, stories are told and secrets revealed. No spoilers here, but chili is involved.

About the play, Weiss says, "I have found working on new scripts to be a pleasure, as there is no precedent to live up to, and you and the actors can really make it your own."

He also enjoys working with the playwright. "It is a delight to work with Anne Pie, as she can offer insight and is readily willing to make changes when necessary. This is my seventh association with either producing or directing Anne's work and all have proven quite successful."

Both plays promise to be tasty with satisfying endings. Just like pie. — Mary Birdsong