A show-stopping number from the Whose Line Is It Anyway? crew 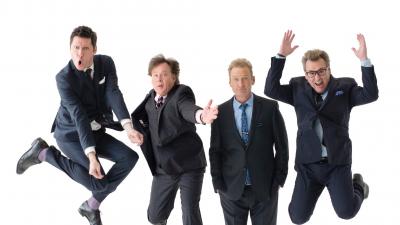 Unscripted, unplanned, and unhinged comedy is what you will witness when you see Whose Live Anyway? at the Warner Theatre. Whose Live Anyway? is a touring version of the hit television series Whose Line Is It Anyway? featuring three of the show's stars in Ryan Stiles, Greg Proops, and Jeff B. Davis, along with Joel Murray (the youngest of nine Murray brothers — yes, Bill is one of them). The appeal of this performance comes from its use of games, gags, and songs to act out scenarios that are improvised on the spot. The jokes are delivered in rapid succession that are filled with one liners, witty comebacks, and often irreverent topics that will keep you laughing through the next bit.

A show that is as unscripted and spontaneous as Whose Live Anyway? requires the type of energy and chemistry that these short-form improv comics have. Stiles and Proops have worked together on Whose Line Is It Anyway? since the U.S. version's first season (and previously on later seasons of the original British version) and Davis since Season Three. They are adding Murray who has over 250 sitcom appearances under his belt, and is known for his work on Mad Men and Shameless, along with the films One Crazy Summer, The Artist, and Bobcat Goldthwait's God Bless America. Whose Live Anyway? combines years of comedic experience with a happenstance attitude toward material that is sure to impress as well as entertain. Whether you are an avid fan of these performers or have just stumbled across one of their videos online, you can expect to see a set filled with random topics and hilarious improvisations. – Larry Wheaton